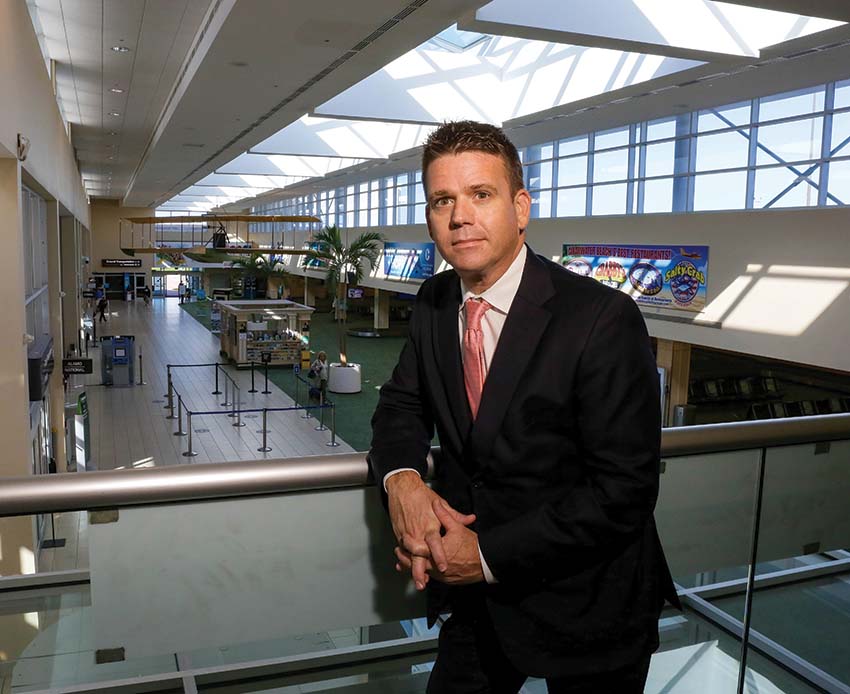 Wilmington University alumnus Mark Sprague grew up in a decidedly nautical environment. His hometown of Tuckerton, New Jersey, sits on Great Bay, 6 miles from the Atlantic Ocean. The borough of about 3,300 boasts a working maritime museum and village. Tuckerton Creek flows some 1.5 miles into Little Egg Harbor. Two yacht manufacturers, Viking and Ocean, are located nearby.

While young Mark loved being on the water as much as the next kid, this preponderance of maritime commerce and activity didn’t tempt him to look to the ocean for a career. Instead, he cast his eyes higher — to the skies. Eventually.

When he entered Pinelands Regional High School, where he participated in theater, marching band, and soccer, he had no idea what he wanted to do with his life. When the school held career fairs, he says, “none of the jobs interested me.”

But one day during his sophomore year, while he was working part-time at the Tuckerton Acme, all that changed. He was manning the cash register when he met a woman who worked for the FAA at Atlantic City International Airport (ACY). “We didn’t have scanners in the checkout lanes,” Sprague says, “so we had to ring everything up by hand, and while I was doing that, she and I got to chatting.”

When the woman said she worked in the airport control tower, he expressed interest, and she invited him and his father to visit her at ACY. A few days later, Sprague and his dad made the 30-mile trip, and it turned into a life-changing event for the 16-year-old.

“The airport environment was just fascinating to me,” he says. “Being in the tower and hearing the planes talk to the controllers, watching all the planes take off and land, seeing them on the radar, and hearing how the air controllers were so calm. I had never been exposed to anything like that, and I was hooked.”

That view from the control tower launched a 30-year career in aviation that has included several titles, including pilot, flight instructor, airport manager, and, currently, deputy director of airport operations and facilities at St. Pete-Clearwater International Airport (PIE) in Florida, where he is overseeing four major construction projects.

Once he chose his career path, Sprague wasted little time in starting the journey. A month after graduating from Pinelands Regional in June of 1990, he enrolled in the Air Traffic Control program at Community College of Beaver County, in Monaca, Pennsylvania. But he quickly found a more exciting course of study.

“CCBC required Air Traffic Control majors to get their private pilot’s license,” he explains, “and once I began to fly, I switched majors instantly.”

He earned an associate degree as a professional pilot from CCBC in 1992. That summer, he moved to Virginia Beach, and put his brand-new pilot’s license to work by flying the iconic banners familiar to beachgoers everywhere. From Virginia Beach to Nags Head, North Carolina, Sprague, at the controls of a Piper Pawnee, advertised happy hours, bands, snow crabs, and two-for-one specials.

“It felt good to finally get paid to fly,” he says.

Then, looking for a school where he could continue his aviation education and get a bachelor’s degree, he heard about what was then Wilmington College from a cousin who lived in New Castle. At that time, the school offered an Aviation and Airway Management and Operations program. Sprague moved to New Castle and enrolled in the program.

“I wanted more of a smaller class size and flexibility to work,” he says. “Wilmington offered all of that, and the recruiters were among the friendliest I’ve met. Kevin Barry was one of them, and I’m glad I can call him a friend.”

I wanted more of a smaller class size and flexibility to work,” says Sprague. “Wilmington offered all of that, and the recruiters were among the friendliest I’ve met.”

Barry, the University’s senior director of Web Communications, says Sprague was and is “very goal oriented. He pursued his goals in the most positive way. And he’s remained the same guy since I met him — always positive.”

Sprague says his two years at Wilmington “were memorable, with lots of good times.”

His course schedule allowed him to work full time while studying for his degree. His first job was at Philadelphia International Airport as a customer service agent for American Airlines. In his senior year, he became a flight attendant for Capitol Airlines, a charter service out of Philadelphia. Meanwhile, training at Wilmington Airport, he became certified as a flight instructor while building his total flight hours.

“I flew on the weekends and studied during the week,” he says.

After receiving his degree from Wilmington in 1994, he continued to expand his credentials, earning his airline transport pilot license, and becoming instrument-rated for multi-engine planes.

Those credentials helped him land a job as director of operations and chief pilot at Northeast Aviation at Northeast Philadelphia Airport. From there, he moved on to become a captain and flight instructor with Comair Airlines in Cincinnati. Comair ceased operations in 2012, but at that time it was the world’s largest regional airline and a subsidiary of Delta Air Lines.

In May 2001, he returned to where his dream had started, joining Spirit Airlines in Atlantic City as a pilot and first officer. While he loved the thrill of being at the controls of a 180-seat jet airliner, Spirit was a domestic airline, and he longed to fly internationally. But 9/11 changed his plans, as it did for many other people.

Perhaps no business was more transformed by the terrorist attacks on the Twin Towers than the airline industry. Delta, United, US Airways and Northwest all declared bankruptcy following the tragedy. As a result, thousands of pilots were furloughed. Sprague knew they would be the first to be recalled once the industry started to recover, and that would make it difficult for him to catch on with a larger, international airline.

“At the time, I was 29,” he says, “and I knew that getting hired by a bigger airline would probably take 8–10 years, and I would start at the bottom, and mandatory retirement age at that time was 60.” A career correction seemed to be in order. So, he says, “I decided to go from the airline side to the airport side.”

In 2004, he moved to the nation’s capital and the Metropolitan Washington Airports Authority, working at both Dulles International Airport and Ronald Reagan Wash-ington National Airport. “As the airport duty officer,” he says, “I was in charge of making sure the airports were in compliance with FAA regulations.”

He also gained some experience in runway, taxiway, and ramp rehabilitation — experience that proved invaluable when he moved to Florida in 2015 to take on his current title at PIE.

Located on Tampa Bay, north of St. Petersburg, the airport marks the birthplace of commercial air transportation. On Jan. 1, 1914 —barely a decade after the Wright brothers’ flight at Kitty Hawk — the first ticket for air travel was sold by the St. Petersburg-Tampa Airboat Line to a fare-paying passenger.

At the historic airport, Sprague oversees four departments — facilities, operations, IT, and aircraft rescue firefighting. Right now, most of his attention is on the extensive construction project that was under-way when he arrived in 2015. At a cost of about $120 million, the project will enlarge and enhance airport facilities, including the terminal, taxiways, and technology, to accommodate more and larger airlines as well as more passengers.

“We just completed rehabilitation of our primary runway,” he said in April. “Now we’re replacing and upgrading the exit lanes technology. We’re also relocating the airfield electrical vault, which includes connections to runway lighting, navigational aids, etc. We expect that to be done by summer. “And we’re designing two new taxiways. They’ll be completed by the end of 2023.”

While supervising all of this, Sprague must also ensure that construction doesn’t interfere with normal airport activity. As he told Blueprint Magazine: “When you’re doing a construction project at an active airport, it’s different from a roadway. You can’t just shut down a lane and put traffic cones in.”

PIE is busy, and getting busier. In January, passenger traffic increased 48 percent from January 2021, with 143,414 people flying out of or into the airport, and March was the second biggest month in the airport’s history, with 255,309 passengers. While Sprague enjoys the challenges of his job, he also appreciates Florida’s Gulf Coast lifestyle. “I don’t like snow,” he says, “and Florida has always been a place I wanted to live.”

He’s giving back to the community, having volunteered for the Big Brothers Big Sisters program for the past four years. “Currently,” he says, “I’m mentoring two ninth-grade students in the Take Stock in Children Program.”

His leisure time is dominated by the beach, baseball (he’s a fan of the Philadelphia Phillies, who train in Clearwater) — and reflecting his childhood spent on and near the water — boating. “I love to fish,” he says. Right now, he doesn’t own a boat. “But,” he says, “I do have a boat lift on my property on Tampa Bay, so there will be a boat in the very near future.”