Dr. Michael Czarkowski, known as Dr. Mike, retired in December after 32 years of service. “It was my time to leave,” he says. “You get a sense of these things.” 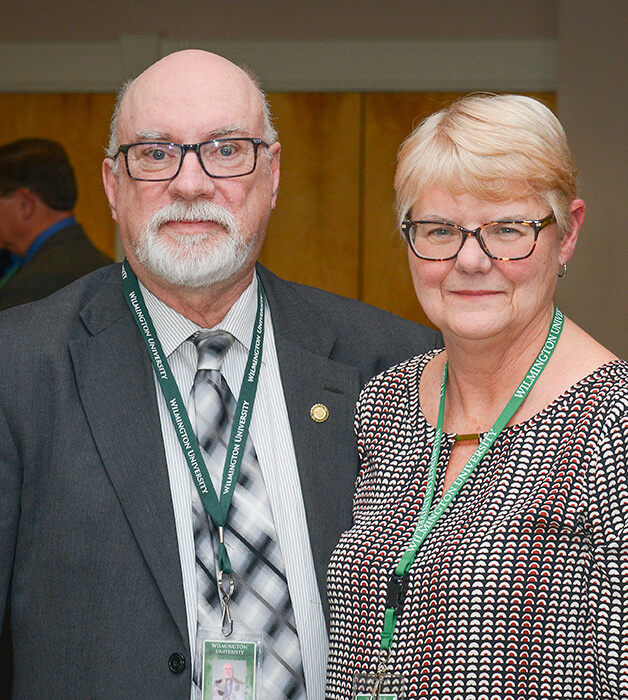 Dr. Mike and his wife, Suzie Czarkowski, both of whom retired in December.

He sensed that life was too short, given the loss of his brother- and sister-in-law, Tom and Elizabeth Schubmehl, who both died young, and his mother, Dorothy Czarkowski, who passed in 2013 of Alzheimer’s disease. He had been on a family trip to Eastern Europe when the subject of retirement came up. “I got to thinking that I wanted to spend more time with my family.”

That family includes Dr. Mike’s wife, Suzie Czarkowski, a WilmU administrative assistant in Dover, who also retired in December after 14 years of service.

Of the many accomplishments in his distinguished career, Dr. Mike calls the Ed.D. program his most significant. “It was certainly a team effort, and I’m proud of the direction we took in getting the Ed.D. in Educational Leadership to designation as a nationally recognized and accredited program.” College of Education Dean Dr. John Gray says, “That was something his two predecessors had been unable to do since the degree program’s inception.”

Dr. Mike, who holds an Ed.D. from Temple University, began his career at then Wilmington College in 1986 as an academic advisor in Georgetown and an assistant professor of Education and Business Studies. He held numerous roles until becoming director of the Doctor of Education programs in 2008. In 2016, he was appointed the director of Academic Assessment and Program Review for the Center for Teaching Excellence. He chaired more than 300 dissertation committees and served as a dissertation second reader, additional reader, or data analysis consultant on 300-plus dissertation committees between 1998 and 2018. He authored numerous papers, including A New Program Review Process at Wilmington University. Internal Consultants Report and Update of Critical Policy component in October of 2018, and
A Curriculum Framework for Content Standards and Course Curriculum in Business, Finance and Marketing Education, published by the State of Delaware.

Outside of WilmU, he served as an education associate and state supervisor for the Delaware Department of Education, as well as for the Air Force, from which he retired in 1994 as a master sergeant (E7).

Several people helped shape Dr. Mike’s career. Former WilmU President Dr. Jack Varsalona taught him that even good ideas have their time and place. Dr. Ronald Watts, a former vice president of Academic Affairs at then Wilmington College, hired Dr. Mike and was like a second father to him after his father passed. Dr. John Camp, whom Dr. Mike knew from the military, was the college’s first academic dean and a loyal friend. Both lived downstate and enjoyed discussions while riding to New Castle together.

In a class by herself is Ann Gibason, whose official title is administrative coordinator/program specialist, though Dr. Mike calls her “the glue that keeps the Ed.D. program running.”

“Dr. Michael Czarkowski showed by example how to be a caring, generous leader and still keep structure and maintain integrity,” says Gibason. “I will miss him immensely.”

As will many others at WilmU, and he them. “I’ll miss the people, and walking into the building, saying hello to everyone,” says Dr. Mike. “I’ll miss the students. I had the most joy working with them one-on-one and teaching in the classroom.”

Perhaps a banana daiquiri (Dr. Mike’s preferred cocktail) will help. He and Suzie are planning a Caribbean cruise with their daughter and her husband, Melissa and Mark Johnston.

He did retire officially, but we haven’t seen the last of Dr. Mike. He’s still planning to teach as a WilmU adjunct. He can’t help himself.