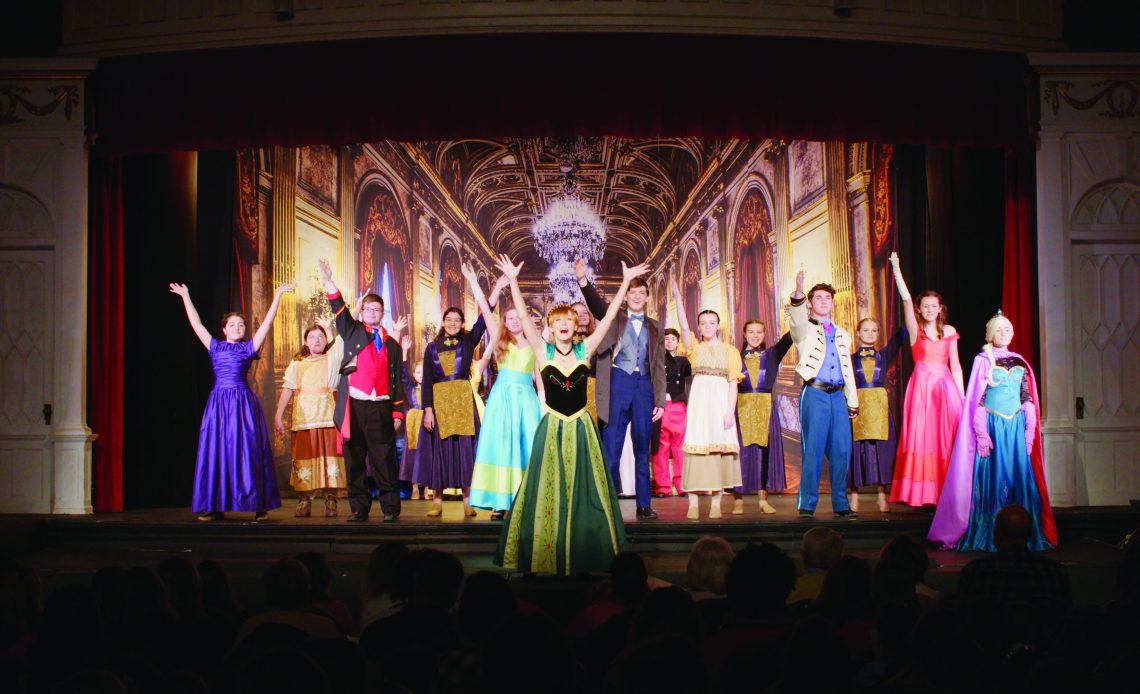 With a wave of her hand, Elsa of Arendelle created ice crystals and ice castles that climbed the walls of the Delaware Children’s Theatre during its recent production of “Frozen Jr.”

She had a little help from two Wilmington University College of Technology students, who harnessed technology and timing to give Elsa her powers.

As part of a Fall 2019 Visual Effects course, students Steven Quigley and William Jamison utilized image rendering, computer networking, and projection map-ping techniques to frost the stage in a virtual winter and thrill the audience with an immersive environment.

“It was a lot different than our typical class projects,” says Assistant Professor Scott Shaw, who chairs WilmU’s Video and Motion Graphics program. “We were breaking the mold of what we’ve done in the past, because this time we were doing it for a live production.”

The opportunity arrived through Adjunct Professor Kenn Koubek, a 2004 graduate of the College of Technology, whose local video production company has worked on previous Delaware Children’s Theatre shows. He and Shaw supervised the students’ work as their Introduction to Compositing for Visual Effects class (VFX 200) turned the proposal into reality. Quigley and Jamison even got to visit the theater’s Wilmington playhouse to set up, test, and troubleshoot the computers and projectors that would enable Elsa to control ice and snow.

“We did this in about two weeks, which is not easy, and not quite enough time, especially when we were meeting once a week,” says Shaw. “It was essentially two classes. But the students were able to see what it takes to do the job in a high-pressure situation. This gave them a chance to see a real-world work project.”

“Frozen Jr.” sold out every performance during its November 16 to December 15 run. On opening night, Shaw texted Koubek, who was one of the show’s musicians, to ask if everything had gone according to plan. “Kenn said he thought the coolest thing was watching all the little hands in the audience pointing to the ice when it started going,” says Shaw.

He sees Quigley and Jamison’s work — and other community partnership projects like it — as a unique and valuable prospect for WilmU’s College of Technology students.

“There are a lot of opportunities for students to show what they’re capable of doing, and a lot of opportunity for us to dovetail it into cooperative education,” says Shaw. “Everybody’s in need of technology. And the amazing thing is, our students can actually step in and do these jobs, right now, in a way that a nursing student or an education student can’t just yet step into the roles they’re training for.”