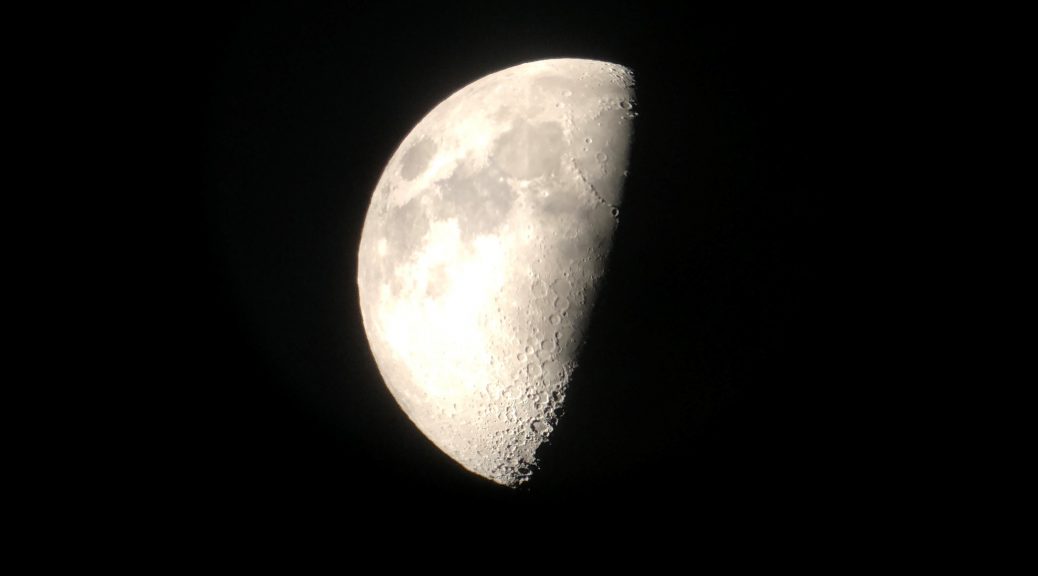 On September 28th, 2017, students in the SCI-304 Astronomy class at the New Castle Campus were given the opportunity to take their studies out of the classroom and into the real world. SCI-304 is a lecture-based science course that many students can take for elective credits and to satisfy their science requirements.

The problem with astronomy is that a lot of it is simply out of reach, literally. There is only so much you can see in the light-saturated area off of route 13, where the New Castle Campus sits.

As the adjunct instructor for the course, I sought to change that. I wanted the students to get to see the stars and learn about astronomy from people in the field. Mount Cuba Astronomical Observatory was the place to do this. Located in the Greenville, Delaware, the observatory houses a 0.6-meter telescope as well as a 4-inch refractor, two 10-inch Meade LX200s, and an 11-inch Celestron. 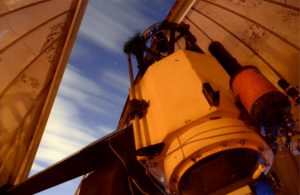 One of the Mount Cuba telescopes. Photo credit: Mount Cuba.

First, we started with a great, short talk about the recent solar eclipse. Students saw a video similar to this taken of the full eclipse during totality, the point at which the moon completely covers the sun.

Then, students from Wilmington University were fortunate enough to get a behind-the-scenes look at the facility’s wonderful telescopes. They were able to look at the moon in crystal clear detail, thanks to a cloudless night. 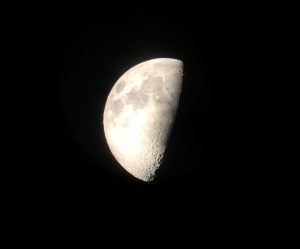 The moon as seen through a telescope at Mount Cuba. Photo credit: Stephen Scheib.

With the naked eye, they also saw the International Space Station zoom past in the night sky (it looked like a plane in regards to brightness, only without flashing lights).

Students were also able to view double-star systems and a globular cluster, a group of stars that orbit the center of a galaxy). They were also treated to a planetarium show, where zoomed-in images of galaxies, nebulae, and stars danced across the ceiling. Stars both young and old were shown in amazing detail not visible from human eyes alone.

Taking the learning outside of the classroom is a valuable experience for all students. Whether the course is an elective or a core program requirement, we should always aim to connect the information to real life experiences. The Mount Cuba Observatory is a hidden gem in northern Delaware that met this need perfectly. The small facility also hosts public and family nights throughout the year. Go outside and see the stars! 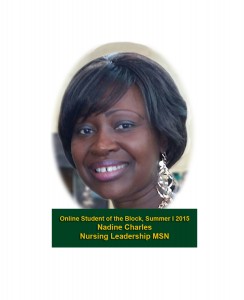 Summer Block 1 2015’s online student of the block is Nadine Charles. Nadine has been working for Christiana Care for 15 years as a Registered Nurse. She is thankful for the partnership between Wilmington University and Christiana Care which has helped facilitate her return to school. Nadine’s goal is to become a leader in her field and mentions that Online Learning at Wilmington University has given her the flexibility needed to continue her education. Nadine also appreciates the support of close family and friends along her journey. She is preparing for her final project and expects to graduate in the Fall of 2015. Great job Nadine!

END_OF_DOCUMENT_TOKEN_TO_BE_REPLACED

In a previous blog post, The Pen is Mightier than the Keyboard (May 27, 2014), we discussed the differences between different styles of notetaking, coming to the conclusion that handwritten notetaking garners deeper understanding of course material than taking notes on an electronic device. What about reading? When you read online, whether it is on a laptop, phone, or tablet, is your comprehension less than than reading traditional texts printed on paper?

The jury is out. There are a number of research studies investigating how the brain processes information on a lit screen versus a static page. But it’s more than a physical issue of backlight, eye strain, and the contrast of type on a background.

The linear nature of the printed page, one idea flowing into another, is completely disrupted by online and interactive texts. Data is served in nodes, with hyperlinks redirecting the reader before the reader processes the entire text. Sometimes this is a benefit, and sometimes not.

Today’s students may find their ability to focus on a text is the biggest challenge. Hyperlinks, videos, and advertising all pull your eyes away from the primary text. There are a few tools available to help you focus.

If you find reading online difficult because of distractions, you may want to try a time management technique. Here are a couple of easily implemented methods:

If you’re a student in the twenty-first century, you’ve probably wondered why professors even bother to require a textbook. After all, the amount of knowledge available online is astounding, abundant, and free. Why don’t academic professionals simply assign open source materials for the courses they teach?

Open Source originally started as a term used to refer to license-free software with freely shared and modified source code. Developers are able to share and collaborate on the software code. Now, the term is used widely to mean shareable data that is available for use, free from restrictive copyright or licensing. Sites such as Wikipedia or Khan Academy are great examples of open source in action.

So what’s wrong with using open source materials in the classroom?

On the internet, anyone is free to publish – and that’s both the beauty and the weakness of the internet. When you use a resource on the internet, it has not had the extensive vetting that a published academic work has had. Educational publishing has a complex system of peer review and cross checking for inconsistency and error.

Carefully chosen open source resources will undoubtedly be a part of the reference materials used in courses you take at Wilmington University. But an authoritative, scientific, and accurate textbook will still be the most reliable and solid choice for a course. 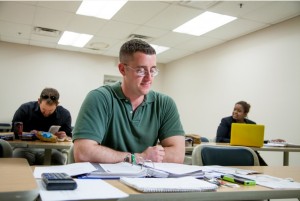 How do you take notes these days? Can you type faster than you can write with pen and paper? If you’re using your laptop to type notes during lectures or meetings, you may want to rethink that practice. The Chronicle of Higher Education (http://chronicle.com/blogs/wiredcampus/taking-notes-by-hand-benefits-recall-researchers-find/51411) recently reported on a new study of note taking practices. This study shows that students have a much higher rate of knowledge retention and comprehension when handwriting notes rather than typing.

“When I type notes, I find that I’m not really listening and comprehending the information. It seems it goes in one ear and out the other while transcribing what the speaker is saying,” said Adam Voyton, Instructional Technology Project Specialist at Wilmington University’s Educational Technology Department.

There’s a scientific basis for Voyton’s impression. An experiment conducted by Jean-Luc Velay at the University of Marseille (http://www.sciencedaily.com/releases/2011/01/110119095458.htm) demonstrated that the brain uses different areas when writing longhand as opposed to typing. Writing by hand engages the sensorimotor memory part of our brain that helps us recognize letters.

The report in the Chronicle of Higher Education states that even though note taking on a computer results in more detailed transcribed notes, long hand note takers have more conceptual understanding of the material, and in some cases, even more factual recall.

But fans of technology shouldn’t despair. Instead of a pencil, why not break out a stylus pen and take notes on a tablet? You’ll have the best of both worlds – the advantage of notes taken electronically combined with the higher brain retentive action of long hand writing.

This Blackboard Organization has been created to serve as a virtual community for WU students that are taking online classes. Participants will have a chance to network with other students, faculty, and staff in a relaxed atmosphere outside of the classroom.

Watch this short video to learn more about the Online Student Association!

You can interact from a distance by participating in various online activities:
Participate in a Discussion Board. You can enter to win a $25 Visa Gift Card by participating in the discussion board of the month!
Each month, students will have the opportunity to attend an online group meeting. The purpose of this meeting is for students to ask questions, express concerns, and share ideas. This meeting will be held using Blackboard Collaborate – a webinar tool similar to Skype.
Participate in a Wiki.
Read about previous students have been selected as Student of the Block. Also, learn how to apply to be the Student of the Block for an upcoming term.

The Wilmington University Relations Department is looking for online students who would like to share their unique Wilmington University online learning experience in a short video piece. We are looking for individuals who live within one hour of the New Castle campus. University Relations can arrange to travel to you! This is a great opportunity for current students to share about your experiences communicating with your instructors and classmates and using Wilmington University’s online technology (Blackboard, webcams, email, etc.) Please email your response to navigator@wilmu.edu by Monday, 9/24/12 and give us a brief summary of your story. If you’re selected, we will contact you to arrange to meet for the video shoot. We look forward to your responses!

With the Fall Semester finally coming to a close, it’s time to get ready for the holidays and prepare to set foot in a brand new year. Finish off the 2011 year by reading this eNewsletter, which contains information on student services and academic resources to help you in completing your educational goals.

We hope that you have a safe and enjoyable holiday break. See you online in 2012! The Online Learning Team navigator@wilmu.edu

This blog is for Wilmington University students. It has information on student services, academic resources, and tips to help students achieve their educational goals.