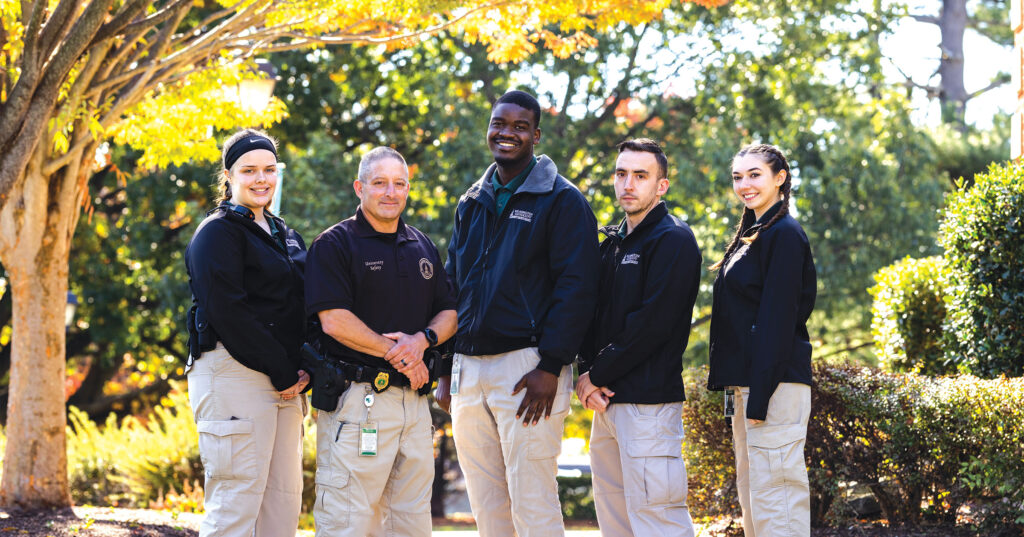 Since 2019, Safety Cadets have been a constant presence on all WilmU campuses. And they’ve made a positive impression.

“The best job on campus.”

The program, which originated with a leadership team headed by Dr. Joseph Aviola, assistant vice president of Administrative Legal Affairs, was implemented in the fall of 2019. It has a two-fold purpose: to supplement Department of University Safety (DUS) staffing after the school’s private security service was eliminated, and to offer students interested in law enforcement careers an opportunity to work alongside and learn from the school’s 21 constables.

Since 2019, Safety Cadets, clad in green polo shirts or black jackets with the University logo and tan pants, have been a constant presence on all WilmU campuses. And they’ve made a positive impression, according to Dennis Craighton, adjunct instructor and DUS administrative manager.

“The effectiveness of the program can’t be overstated,” says Craighton. “Cadets are available and trained to respond to the many calls for service, enabling the constable staff to respond to more serious calls that may require a law enforcement presence.”

Cadets don’t have the authority to arrest anyone, but they have several duties, including: patrolling facilities; responding to calls from and escorting students, faculty, staff, and visitors; monitoring traffic and assisting with traffic control; securing and opening buildings and classrooms, and working the student identification station. 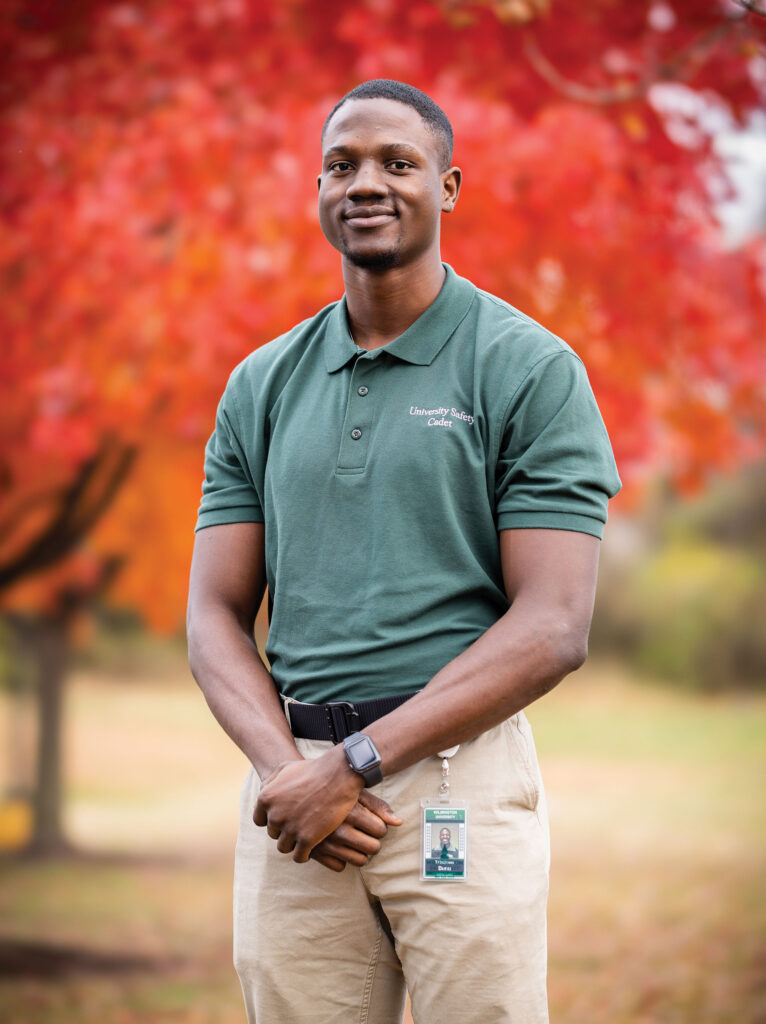 In addition to an hourly salary, cadets can earn credits through the Work-Integrated Learning program.

Program coordinator Adam Brams spent 28 years with the New Castle City Police before retiring as a lieutenant six years ago, when he joined the DUS. Brams, who was in charge of a volunteer program while with New Castle Police, does a 15-minute presentation at First Year Experience seminars to help recruit candidates.

Those who apply must appear before a panel of three or four constables who pose questions and scenarios to them. “This is a good preparatory experience for them, especially if they’re planning on entering the law enforcement field,” Brams says. “Oral board panels for law enforcement positions can be grueling and intimidating, and this gives them a snapshot of that process.”

Brams worked with the constables to set up the training program, which extends over as many as four days. Topics include first aid, CPR, A.L.I.C.E. (Alert, Lockdown, Inform, Evacuate, Counter), verbal de-escalation, integrated medical response, use of pepper spray, self-defense tactics, and general public safety operations, including the access control and CCTV camera systems.

Lastly, recruits undergo field training, where they’re paired with senior cadets and constables and oriented to the daily duties they’ll be performing.

Instructors are drawn from the constable staff, most of whom have 25 or more years of experience with agencies such as the Delaware State Police, New Castle County and New Castle City Police, Delaware River and Bay Authority Police, the FBI, and executive security.

Bunu gives the instructors high marks. “We had experienced specialists in each field speak with us,” he says. “And it wasn’t the usual ‘death by Power Point’ you often get. It was interactive, role playing, and the integrated medical training was very hands-on.”

“My family has a security company in Zimbabwe,” he adds, “and I would like to implement all the things I learned here back home.”

Senior Maddie McCarthy says being a Safety Cadet gave her a better understanding of the subjects covered in her Criminal Justice program.  “Being able to have first-hand experience gave clarity to the field advice that my professors had covered in lectures,” she says. “It’s an amazing addition to my education.”

The nine current cadets work five-hour shifts and cover all campuses. They carry pepper spray, a flashlight, and a radio.

Of the current group, Brams says, “We’re fortunate to have them; they’re really on the ball. And we have a nice mix of students and majors, not just Criminal Justice.”

He believes the students are a better fit than the former private security service. “They’re more invested in the school and the environment, and the age group relates really well to students because they’re peers.”

Craighton says the University community quickly took notice of the cadets. “We started receiving positive comments from students, faculty, staff, and visitors almost immediately,” he says. “Many of the comments related to not only the quick response to calls for service and the professionalism shown by cadets, but also the feeling that the University is committed to providing a safe and secure environment.”

Cadet Destiny Bryant says the training enabled her to act calmly when she helped Constable Wyatt Foraker resolve a medical issue experienced by a staff member at the Brandywine Campus. Foraker later praised Bryant for her professional behavior.

Destiny Bryant and Maddie McCarthy enjoy the camaraderie of being cadets while earning an hourly salary and credits through the Work-Integrated Learning program.

Bryant, who is majoring in Biology with a Forensics concentration, says she has become more alert to any potential incidents on campus, and her training has given her confidence that she can handle those situations calmly.

In addition to on-the-job guidance, the veteran constable corps can provide valuable connections to employment after cadets graduate. In the short life span of the program, three former cadets have been hired by law enforcement agencies.

One of them, Emily Todd, who graduated with a degree in Criminal Justice in May of 2020, is doing often sensitive government work as a physical security specialist for the Department of the Army at its TRADOC (Training and Doctrine Command) Headquarters at Fort Eustis, Virginia.

Noting that she sometimes works with TRADOC’s anti-terrorism officer, Todd says, “Much of my job is classified, but it requires a lot of travel to Army installations all across the country to assess and ensure their physical security measures are up to army regulations and standards.”

She says she was “truly blessed” to have been a Safety Cadet.

I believe that I had a leg up when interviewing for jobs due to the experiences I had from the cadet program.” — Emily Todd

Todd gives special credit to the WilmU constables. “I got to work alongside some of the most prestigious law enforcement officers that Delaware was extremely lucky to have,” she says, “and they instilled in me a tremendous amount of knowledge that I am so grateful for.

“They were always willing to share their knowledge and stories of things they experienced throughout their careers, and they were never hesitant to help with any of my school assignments or to provide real world insight to what I was learning in school. Thanks to them, I was able to truly succeed and have a different perspective on what I was learning in my classes.”

In the end, says Brams, the Safety Cadet program is “customer service — a way for the DUS to be more engaged with the University community, especially our students.”

That aspect of the program is extolled by Bryant and Bunu.

“I have gotten to meet so many people on campus while working here,” says Bryant.

Adds Bunu: “You not only get to talk to so many interesting people, you also get to be the hero for some very important and influential people.”