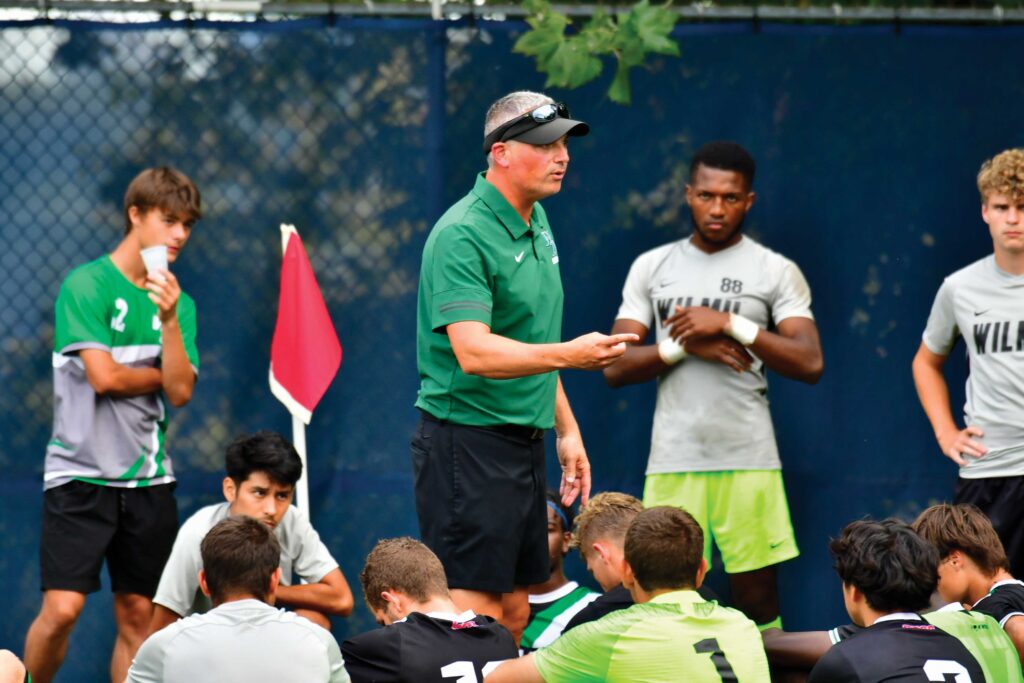 When Dimitrios and Maria Papanicolas arrived in the United States from Greece in 1968, their plan was to stay only a few years to help Dimitrios’ brothers with their new restaurant on Kirkwood Highway in Wilmington.

Hundreds of past and present Wilmington University soccer players are thankful that their plan was scrapped.

After a year or so, the couple decided to stay in America. They became restaurateurs themselves, and settled in the Pike Creek area of New Castle County. There, they raised two daughters and one son, Nicholas, who was born in 1973.

Young Nick Papanicolas had a passion for soccer, and he went on to achieve All-State honors and lead the state in scoring as his St. Mark’s High School team won the state championship. His college career was interrupted by a serious foot injury, and he spent four years as an assistant at St. Mark’s before enrolling at Rowan University in 1997. There, Papanicolas became a three-year starter, led the team in scoring his sophomore year, and was captain in his final two years. During his three seasons at the New Jersey school, the Profs earned three NCAA berths and reached the 1998 Final Four.

Papanicolas received a bachelor’s degree in Art Education and went on to earn a master’s in Higher Education Administration at Rowan while serving as graduate assistant from 2000-02. Now fully committed to coaching, he signed on as an assistant at WilmU in 2003, and assumed the head coaching job the following season.

His first couple of years as the leader of the Wildcats were less than successful. The team won just four games in 2004 and five in 2005.

Then good fortune struck. Papanicolas got word of a neighborhood in Southwest Philadelphia, populated mostly by natives of West African countries, that was a spawning ground for skilled soccer players. He drove to Philadelphia and scouted the Public League final four playoffs and an all-star game, where many of those athletes displayed their skills.

“There was a ton of talent there, and I was amazed that I was the only college coach who showed up,” he says.

Papanicolas tapped into that talent, and his team’s fortunes quickly did a 180. “In 2006, we had the fourth best turnaround in the country,” he says. “We went from 5 and 12 to 12 and 5. Little by little, the program grew. We had our first All-American, our first conference Player of the Year, our first player to sign a professional contract.”

That kind of success attracted attention from the soccer world —emphasis on world.

“Division II soccer is very much international, especially on the men’s side,” says Papanicolas. “We started making contacts in other countries and bringing in foreign players. Now, in the last five years or so, most of our roster is international. They trust us to get them to the next chapter of their lives, whatever it is.”

“Coach Nick” also has recruited a coaching staff with an international flavor: four of his six assistants are from foreign countries and four are WilmU grads. As a result, he says, “We have a very diverse team and a diverse coaching staff. We believe that’s an advantage to us.”

One of his top assistants is alumnus Anthony Allison, who joined the staff in 2016 after a six-year professional career. A native of Liberia and graduate of Overbrook High School, Allison was one of those first Philadelphia recruits and a primary contributor to the 2006 turnaround season. Playing as Sargbah Tarpeh, he scorched Wildcat opponents for four years, winning almost every individual honor, including Central Atlantic Collegiate Conference Rookie of the Year, CACC Player of the Year, East Regional Player of the Year and first team All-America.

“Wilmington is a special place,” says Allison, “and Nick is a special coach. He was great to play for. Players are comfortable with him. He’s always there for them, like a father figure.”

As for his duties as an assistant coach, Allison says, “I enjoy mentor-ing and developing players.”

He is one of 11 former players who have gone into professional soccer at some level — a fact that can influence recruits. “Many of them have aspira-tions of turning pro,” Papanicolas says.

We have a very diverse team and a diverse coaching staff. We believe that’s an advantage to us.”

In his 18 seasons as head coach, Papanicolas has accumulated 200 wins. Next year, he will reach 201, which will give him the most wins of any men’s soccer coach in conference history. He has done it with a program based on discipline, hard work, and dedication to the game and the classroom.

“We always keep in mind that our players are student-athletes,” says Papanicolas, who also works in the University’s Student Life Department. “It’s important to balance those two. They develop themselves as people, and soccer is a platform for that. We focus on our craft and helping each player develop physically, mentally, spiritually.”

The Wildcats also had their first national Division II Player of the Year in Lorne Bickley, who broke Allison’s school and CACC record for goals and points in a season. He also led all of DII in goals and points that season.

Bickley, now playing profession-ally in Europe, credits the University with giving him “the best four years of my life.”

In the U.S., soccer has not achieved the popularity level of football, baseball and basketball. Papanicolas, the father of four young boys, only one of whom is currently playing soccer, understands that.

But to the rest of the world, soccer is known as “the beautiful game,” and Coach Nick certainly views it as such.

“We feel that’s the style we play,” he says. “It’s a passing game, and we play it with a rhythm and a balance where everybody attacks and everybody defends together. We play the game the right way, the way it’s supposed to be played.”