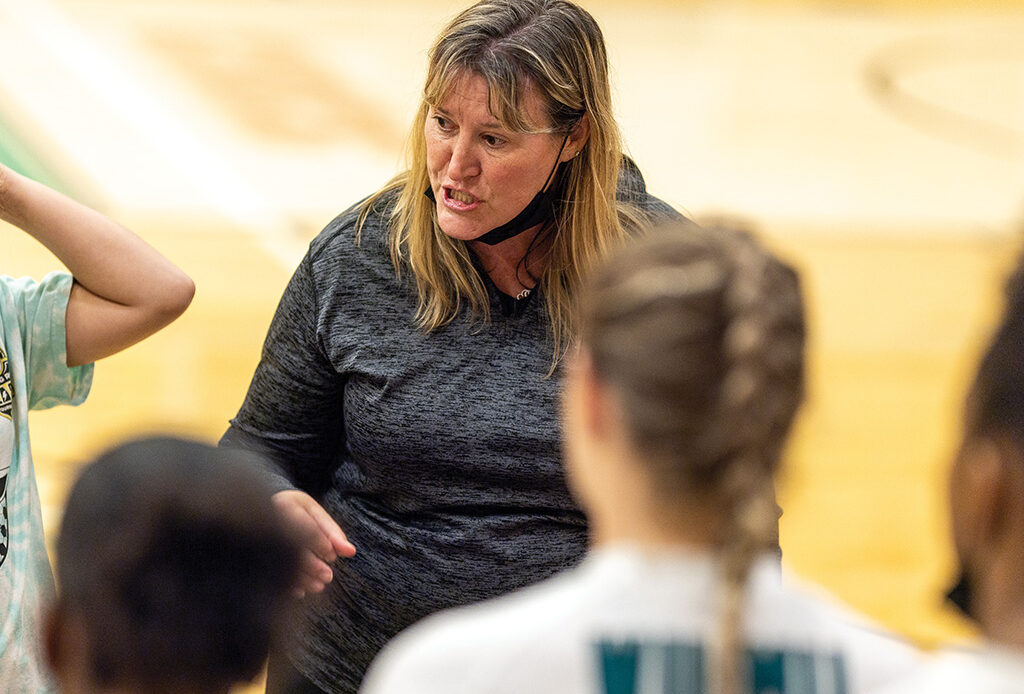 Kim Huggins-Habbert has good memories of the days when her women’s volleyball team played at the Pratt Student Center. But she’s grateful that Wilmington University chose to invest in its state-of-the-art Athletics Complex in Newark, Delaware, which opened in 2012.

This year will mark Huggins-Habbert’s 19th as head coach of the women’s volleyball team. She began the same year WilmU joined the NCAA Division II ranks — 2004. In that time, she has won 315 games while losing 248, a .560 winning percentage

She has had the Wildcats in the CACC Tournament in all but five seasons, and they’ve won 20 or more games eight times during her tenure.

Before joining WilmU, Huggins-Habbert spent 10 years at the helm of the girls’ volleyball team at Christiana High School in Newark, Delaware, her alma mater. She led the Vikings to two Blue Hen Conference titles and an appearance in the Delaware State finals. She was named the Delaware Interscholastic Volleyball Coaches Association Coach of the Year in 1995. Huggins-Habbert finished her high school coaching career with a record of 113-66.

A versatile athlete at Christiana High, she excelled on the swimming and volleyball teams and participated in track and field. She received a partial swimming scholarship to James Madison University, but after enrolling, she decided to give up swimming and join the volleyball team as a walk-on.

“Swimming is not really a team sport,” Huggins-Habbert explains, “and what I fell in love with in volleyball was it’s a team sport through-and-through. My heart just wasn’t in swimming.” In her sophomore year, she scored a partial scholarship from the volleyball program.

After graduating from JMU with a degree in Mathematics and a minor in Secondary Education, she became a teacher and assistant volleyball coach at Brandywine High School in suburban Wilmington, then was recruited by Christiana High to be its head coach in 1993. She continues to work at the school as a guidance counselor, and she enhanced her credentials by earning a master’s in School Counseling in 2000 from then-Wilmington College.

When she took over as Wildcat head coach, Huggins-Habbert found that her biggest challenge was recruiting. “Figuring out how to recruit and where, and what do you do in recruiting, those were the hardest parts of coaching,” she says.

At first, she recruited from the surrounding region — Delaware, Pennsylvania, Maryland, sometimes New York. “Now,” she says, “our roster comes from all over the country. We even have a Canadian.”

She has learned that team members are key in attracting new athletes.

“Our girls are great at selling the culture of the program and what it’s about to be here and be part of the University,” she says. “One of the things I’ve learned is that kids want to be part of a program where they really feel like they belong, and having my athletes involved in the recruiting process has really helped us over the years.”

She also makes sure her athletes appreciate the support they receive from the University staff. “I remind them every day about the great facilities we have and how much our school cares about its athletics program,” she says.

Her practices are tough but often fun, too, like when she cranks up “The Electric Slide” or “Cotton-eyed Joe” to turn line dancing into the team’s warm-up routine. “Line dancing teaches muscle memory,” Huggins-Habbert explains, “much like volleyball, where things like approaches, getting to where you need to be, blocking footwork — all of that is muscle memory. So we thought it would be fun, but it would also build a skill that they can use in the sport.”

“She pushes you,” says Alex Siolos Delagol, who played for the Wildcats from 2012 to 2016. “She’s intense, very competitive, and she hates to lose, which I love.”

After earning her degree in Sports Management, Delagol served as Huggins-Habbert’s graduate assistant for two years and grew to appreciate her coach’s dedication. “After games, we would go over stats and discuss the game for an hour or two. You could see the passion and commitment it takes to coach at that level.”

One of the things I’ve learned is that kids want to be part of a program where they really feel like they belong.”

Huggins-Habbert also keeps her athletes involved in community outreach activities. They are currently working with Team Impact, a program that pairs children suffering from serious or chronic illnesses with college sports teams.

“We adopted a 13-year-old girl (from Team Impact) in the spring of 2021, and she is with us for the next couple of years,” says the coach. “She comes to practice, games, and team activities that she can make, just like a member of our team. The goal is to help develop positive relationships with our athletes to assist with the ‘full circle of healing’ for the child. The athletes truly have welcomed her with open arms, and I believe it gives our athletes a different perspective on life.”

Huggins-Habbert and her husband are parents of 10- and 12-year-old girls. As for her WilmU “kids,” the coach says, “They are a group of young ladies who have grown and matured and are ready for the next stage of their lives. It’s not just about winning on the court, but off the court as well.”