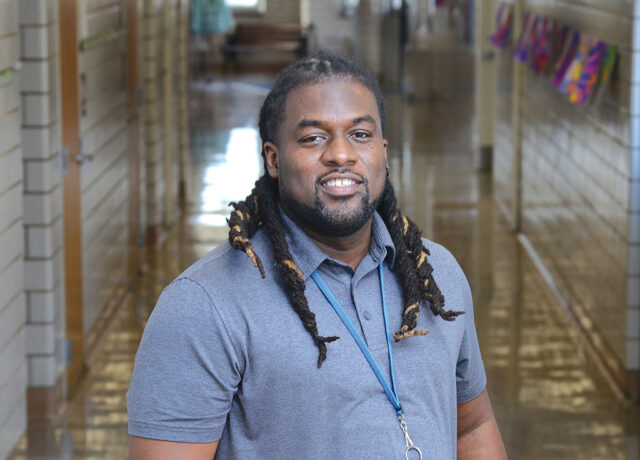 One of only three men among the 30-plus teachers and paraeducators at the school, Mims finds that the younger boys often seek him out. “First and foremost, me being a male, not just a Black male, has helped,” he says. “A lot of the younger boys, they really come to me for help. Seeing another male, I guess it makes them feel good about being young men.”

His experience at Seaford Central, coupled with the fact that he is a 41-year-old husband and father of five who has made a career change to become a teacher, make Mims the embodiment of what the College of Education (COE) hopes to accomplish with an array of innovative and impactful initiatives designed to attract future educators. 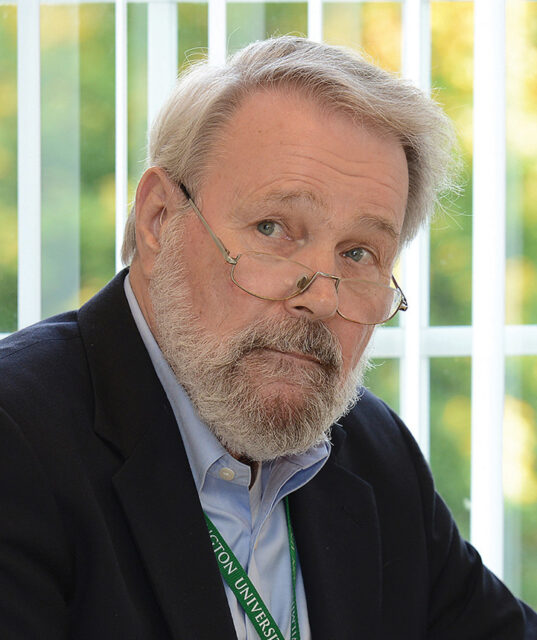 Led by Dean Dr. John Gray, the COE is deploying those initiatives to tackle not only a statewide teacher shortage, but more specifically the shortage of African American male teachers.

In truth, asserts Dr. Gray, “teacher shortage” is something of a misnomer. “There is no teacher shortage overall, but there is one in certain areas,” he says. He cites Special Education, where there are more than 100 vacancies in Delaware. Science and math are other areas of need.

“Complicating all that is the COVID crisis. Many teachers have said they are going to quit because they can’t take the pressure anymore,” he says. “It’s been a very difficult two years for classroom teachers. They are leaving in large numbers.”

But perhaps the gravest ongoing problem is at the elementary school level, where, Dr. Gray says, “most teachers are middle-class white females, whereas most of the kids in Delaware elementary schools are lower income­­ — in terms of socio-economic level, minority, and males. So there’s a real conflict there.”

Overall, about 14% of Americans are African American, while only 7% of public school teachers are African American, and only 2% of those educators are African American men. That leaves a critical void. According to District Administration, a print and digital media service for K–12 leaders, “Black educators have an incredibly positive, measurable effect on the lives of young Black students. When kids see teachers who look like them, they perform better academically. Seeing themselves reflected in the people they look up to opens their minds to new learning and career possibilities.”

In the past, Wilmington University, like almost every other institution of higher learning, had no ready solution for this problem. “We’ve had as few as zero African American males studying to be teachers,” says Dr. Gray. “They’re rare, and when they come along, they are snapped up by school districts.” 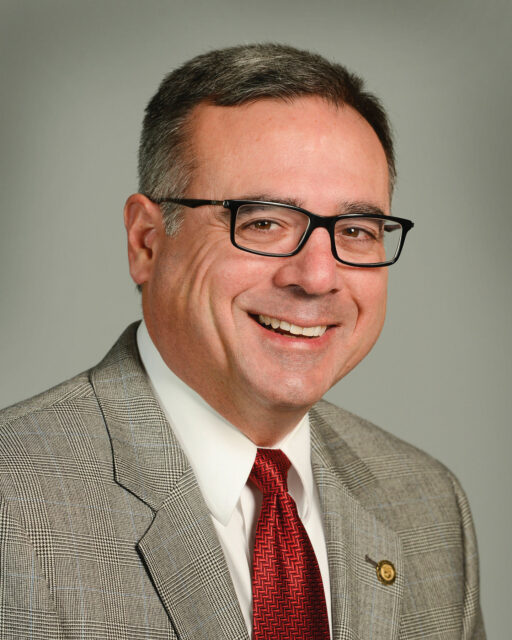 Now, however, the University has several new ideas designed to cut the costs and time required to become a teacher, and at least one of them is aimed at minorities: The Promise Grant. “John (Gray) created it,” says Dr. Rob Rescigno, assistant vice president of Academic Affairs and associate professor. “It’s a full scholarship for students of color that includes tuition, books, and fees.”

Mims is one of three students now on the Promise scholarship. “We have two more in the pipeline,” says Dr. Gray. “Five may not seem like a lot, but compared to what we had before, that’s a 500% improvement. We’re hoping the word will spread.”

Promise support personnel includes two recruiters and a mentor. Frank Hanson, a WilmU grad who taught carpentry and now is assistant principal at St. Georges Technical High School in Middletown, Delaware, is the mentor. The 2020 Teacher of the Year at St. Georges, Hanson grew up in Ghana, where teacher demographics are decidedly different from those in the U.S. All his teachers were Black, and by the time he reached high school, the majority were male.

“I had a good experience in school because every teacher looked like me,” says Hanson. “I enjoyed my schooling. It was easy for me to say, ‘I want to be like that teacher.’”

Because of the pandemic, he meets regularly with the three Promise scholars by Zoom or phone. “I love mentoring them,” Hanson says. “I help make sure they’re on track to graduate on time. Sometimes it’s a struggle because they all have jobs, but I tell them to compartmentalize. I help them get assistance they might require from the University.”

Recognizing the need to fill the teaching pipeline, the COE has an aggressive recruiting program led by adjunct faculty member Hazel Showell-Walker. She tells the WilmU story at high schools throughout the state that are part of the Teacher Academy, which prepares students for careers in elementary and secondary education by offering coursework (for college credit) in and out of the classroom. 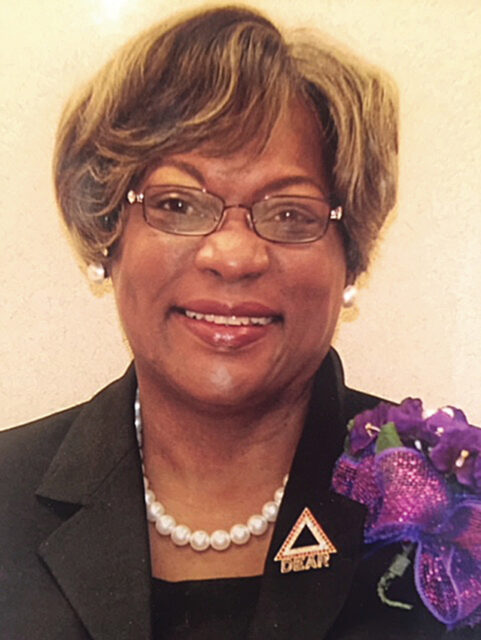 Showell-Walker has a compelling narrative when discussing WilmU with aspiring teachers. She usually starts with a few fast facts: More than half of all Delaware educators earned their credentials at WilmU; 12 of the 20 Delaware School District Teachers of the Year for 2020 were Wilmington University graduates; 11 of the last 14 Delaware Teachers of the Year hold WilmU degrees.

She adds that those results emanate from education preparation programs that are fully accredited, nationally recognized, and state approved.

Ever the passionate ambassador, Showell-Walker declares: “WilmU is the best university in the state.”

It’s certainly one of the most affordable, and that affordability has been enhanced by several recent innovations, including an offering that reflects the school’s commitment to aspiring teachers. WilmU is the only university in the United States to offer college credits to high school students who pass the Praxis exams during their senior year.

Says Dr. Rescigno, “If students enroll at WilmU while in high school, we will offer them 19 credits for passing the four exams.”

In some circumstances, the tests, which can cost the student hundreds of dollars, present a barrier to an undergraduate degree.

“Standardized exams can be major obstacles for people of color for many reasons,” says Dr. Gray. One problem, is that these students attended poorly staffed and inequitably funded or equipped K–12 schools.

For students who don’t pass the Praxis exams and come to the University, the COE added a Praxis coordinator, adjunct Ashley Wilson, who creates plans for them. 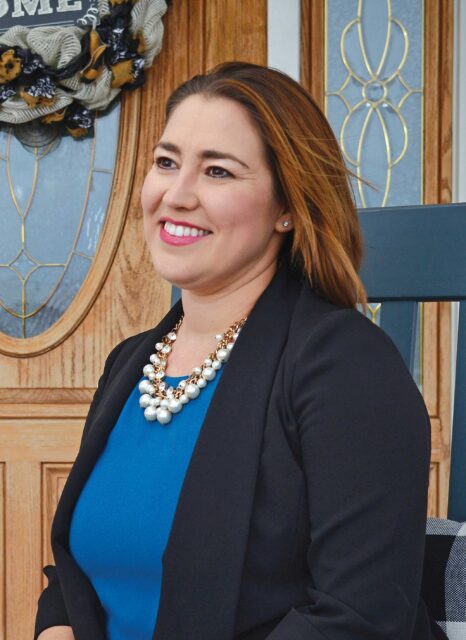 Dr. Rescigno says it can be emotionally devastating “for someone who has gone through the program and worked really hard and wants to be a teacher, but the one obstacle keeping them from that is a standardized exam.”

Math and science are particular impediments, adds Dr. Gray. “Keep in mind, our students are not typical; many are in their late 20s or early 30s and have not had math since eighth grade. The same is true for science.”

In addition to credits for passing the tests, high school students can earn 20–30 credits through the Dual Enrollment and pathway articulation programs. Dual Enrollment is a partnership between WilmU and more than a dozen high schools throughout the state to deliver on-site course work to eligible students. The University has evaluated select courses in participating high schools and has approved the faculty, syllabi, and textbooks for college credit.

With this head start, a student can graduate in three years or less and begin working, or enroll in a master’s program. Eligible students can also receive a reoccurring scholarship that reduces tuition per credit by 15%, which saves them up to $7,196 for a bachelor’s degree. Students become eligible by meeting specific criteria, including completing their high school diploma, enrolling at WilmU within a certain time period, and maintaining a minimum GPA.

But the University’s efforts to help COE students don’t end there. WilmU offers other innovations to fast-track students and help them financially.

One of those is the Year-Long Residency. Student teachers can choose from two tracks: the traditional 15-week program or Year-Long Residency, in which they are placed in a classroom with mentor teachers for a full academic year. The program, taking its model from medical residencies, fully immerses the student teachers in school culture, and they share all responsibilities with the mentor teacher.

First implemented in the 2014–15 academic year, the program is the brainchild of Tyler Wells, assistant professor and program chair of the Office of Clinical Studies. At first, it was funded by small local grants. Then a grant from the National Center for Teacher Residencies brought the program into the national spotlight. Three years ago, the Delaware Department of Education took notice and offered a $1 million competitive grant, which has been renewed every year since, and is now at $2 million. WilmU has been receiving the lion’s share of the grant. Last year, the University was awarded $590,000. This academic year, that figure jumped to $940,000. The remainder was split among the University of Delaware, Delaware State, and Relay Graduate School of Education, a largely online institution.

Wells emphasizes that the entire amount goes to funding students; the University keeps none of it. Participants are paid $20,000 or $25,000, depending on whether they are at a high-needs school. In contrast, those in the 15-week program receive a few thousand dollars.

As a further incentive, the University offers a 50% tuition reduction to year-long residents. Explaining that this applies to the student’s last 24 credits, Dr. Gray says, “This was unheard of, but we made this proposal to our President, Dr. LaVerne Harmon, and she said, ‘yes, we need to do this.’”

Finally, once students receive their undergraduate degrees, WilmU has fashioned a creative pathway to their master’s degrees. It involves “bundling” of skills, sometimes referred to as “stacking.”

Dr. Rescigno explains: “After a student graduates, it’s important for him or her to get a master’s, for both certification and pay raises. If the student comes to WilmU for a master’s, the College of Education has created a program that allows bundling of graduate certificates into a customized master’s degree.”

Current teachers, he points out, can certify in high-needs areas such as ESL and Special Ed.

In all, Dr. Rescigno says, “there are 66 combinations — 66 ways to get a master’s degree” through about 16 bundles that include Reading, Autism, Teaching and Learning, Early Childhood and Exceptional Education, Technology, and Leadership.

While growing public school enrollment combined with a dwindling teacher workforce promise to be a challenge throughout America for at least the next decade, in Delaware, Wilmington University is answering that challenge. WilmU’s results-driven, affordable initiatives constitute a continuum of teacher development, from candidate to novice to master teacher, that very well may serve as a model for the rest of the nation.