Dr. Michael Nolan: The Principal and the Canine Rock Star 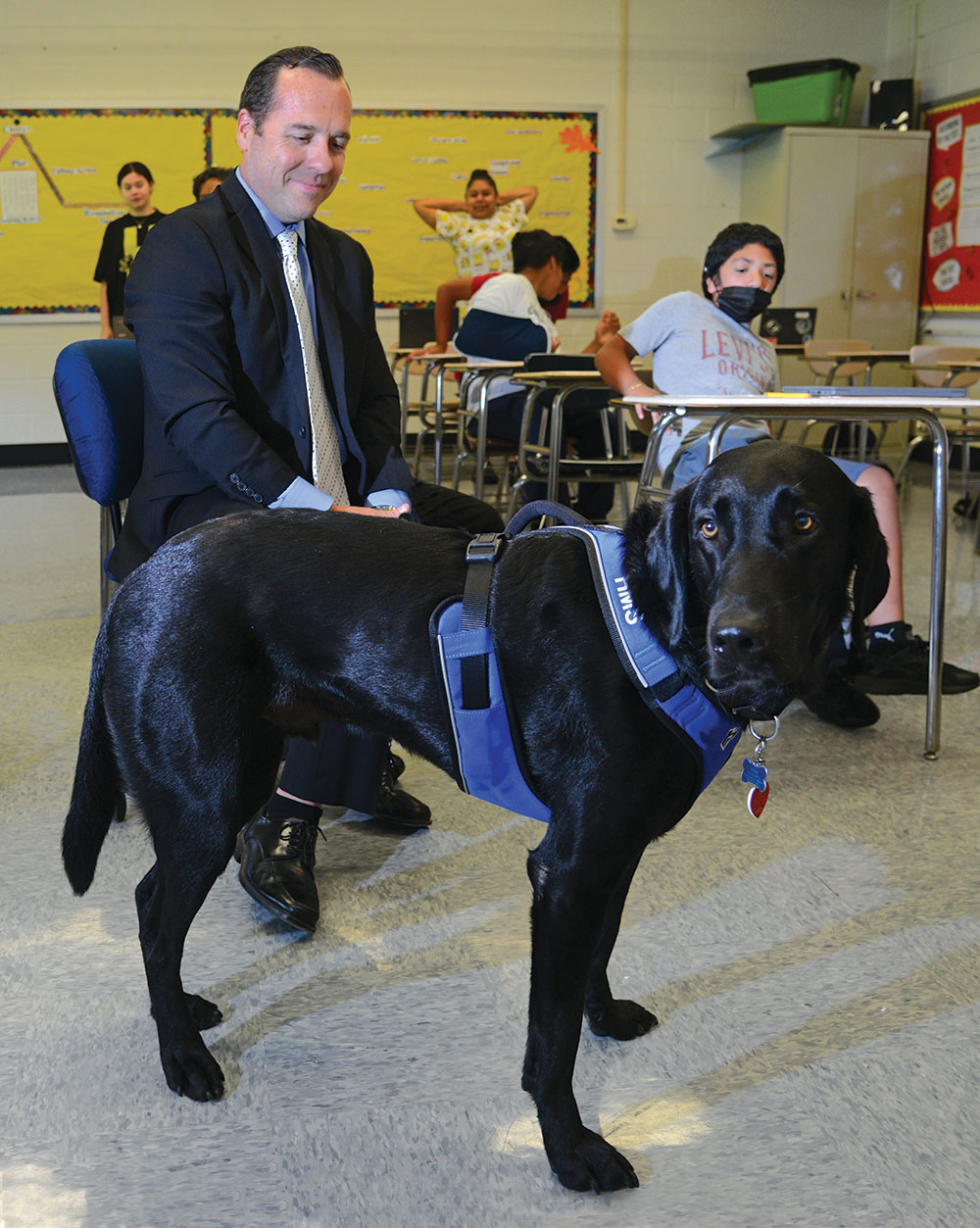 As officials lifted or eased lockdown COVID-19 re-strictions across the nation over the last few months, a new malady entered the lexicon: re-entry anxiety.

As you might guess, it means fear, worry, or even dread over resuming activities such as going back to work or school.

At Hammonton Middle School in Hammonton, New Jersey, they have an antidote for this pandemic-produced problem: Wally, a 3-year-old therapy dog.

The students met Wally in early February after they returned to school following a snow day and two days of remote learning. Making the introductions was Dr. Michael Nolan, principal of the school and holder of both a master’s and Ed.D. from Wilmington University.

Therapy dogs have proved effective for years in hospitals and nursing homes, and recently have gained popularity in schools. Dr. Nolan saw a newspaper story about one such dog in a school in nearby Absecon. He did some research, got the go-ahead from his superintendent, then he and a guidance counselor and special education teacher wrote a proposal in March of 2020. “It was right before the shutdown started,” says Dr. Nolan.

They secured approval from the district in May, started shopping in June, and immediately encountered a problem: In addition to a scarcity of toilet paper, cleaning supplies, and bicycles, the pandemic had created a dog shortage.

“Everybody was stuck at home and everybody was getting a dog,” says Dr. Nolan. Naturally, the demand led to higher prices for the specially trained dogs, whose cost can range from $15,000 to $50,000. Fortunately, the team had secured a grant from the Hammonton Education Foundation, a local nonprofit that funds educational initiatives in the school district.

A stroke of luck brought Wally to Hammonton. He was being trained in Missouri when, for unknown reasons, the trainer dropped out of the picture. Wally was transferred to Will Meyers, owner of Full Service Canine in Ocean View, New Jersey, and a certified trainer by the Alliance of Therapy Dogs.

“Only a small percentage of the kids had been coming in to school,” he says. “Some had been out for 13 or 14 months.” By April, about 70 percent had returned to the building, and Wally was there to greet them.

[Wally] just walks around and makes people happy just by being himself. He’s like a rock star.

An American black Labrador, Wally lives with Dr. Nolan, his wife and three daughters. The Nolans also have a Jack Russell-Chihuahua mix. “We’ve always had dogs,” he says, “but I’ve never had one as good as Wally or as well-behaved.”

He at first was apprehensive about how Wally would react during, say, a fire drill or a commotion in the hallway. “But he was nothing but phenomenal. And now my confidence level with him is through the roof.”

Dr. Nolan brings the Lab to school every day. “He usually greets kids in the morning as they get off the buses or as they get dropped off. After that, we make our way through the building, and he spends some time in the guidance office, helping out the counselors.

“Our next goal is to have him work on literacy, with struggling readers. Studies show that it helps with comprehension and oral reading to have kids read to dogs. The dog is a non-judgmental environment for the kids.”

Wally has visited all four schools in the Hammonton District, and he proved especially valuable during the COVID-19 crisis. “We had students who have family members who are sick due to COVID or who have actually lost family members,” Dr. Nolan says. “He’s able to be in on those counseling sessions, and being around a dog and petting a dog makes you a little bit happier, makes you open up a little more.”

Dr. Nolan says the middle school has become a model for other area schools, prompting them to look into getting therapy dogs. “I love that we’re not only helping our community, but that we are having an impact in other communities.”

A native of nearby Audubon, Dr. Nolan began teaching Language Arts and Social Studies at Hammonton Middle School right after graduating from Old Dominion University in 2002. He was named assistant principal in 2008 and moved up to principal in the summer of 2013.

“I’m really fortunate to get a job here and work my way up through the administrative ranks,” he says.

Partial credit for his professional success, he says, goes to his two degrees from WilmU: a masters in School Leadership in 2006, and an Ed.D. in Innovation and Leadership in 2015. He was named principal when he was halfway through his doctoral studies.

“I landed the job due certainly in part to what I had studied and learned in the Ed D. program,” he says.

He found his frequent 50-minute trips from Voorhees to Wilmington well worth the time and effort. “I can’t say enough good things about WilmU, from my professors to the structure they’ve created,” he says. “They ‘got it’ before everybody else. They were flexible for people who work full-time before everybody else was willing to be flexible. The seven-week courses, five hours a week in class – very manageable. And I learned so much. I absolutely loved it.

“I tell everyone around here who is thinking about an advanced degree, check Wilmington University before you check anywhere else. They’re flexible and you’re gonna learn a ton while you’re down there.”

He says his doctoral studies were particularly valuable. “My cohort was about 20 people, and you’re with them for 2-1/2 years. So now I have professional friends from Baltimore to Pennsylvania and New Jersey.”

Perhaps those friends will soon be hearing about the physical, social, emotional, and cognitive benefits of therapy dogs, accompanied by a rhapsodic sentence or two about a certain American black Lab.