A Dream Deferred No More 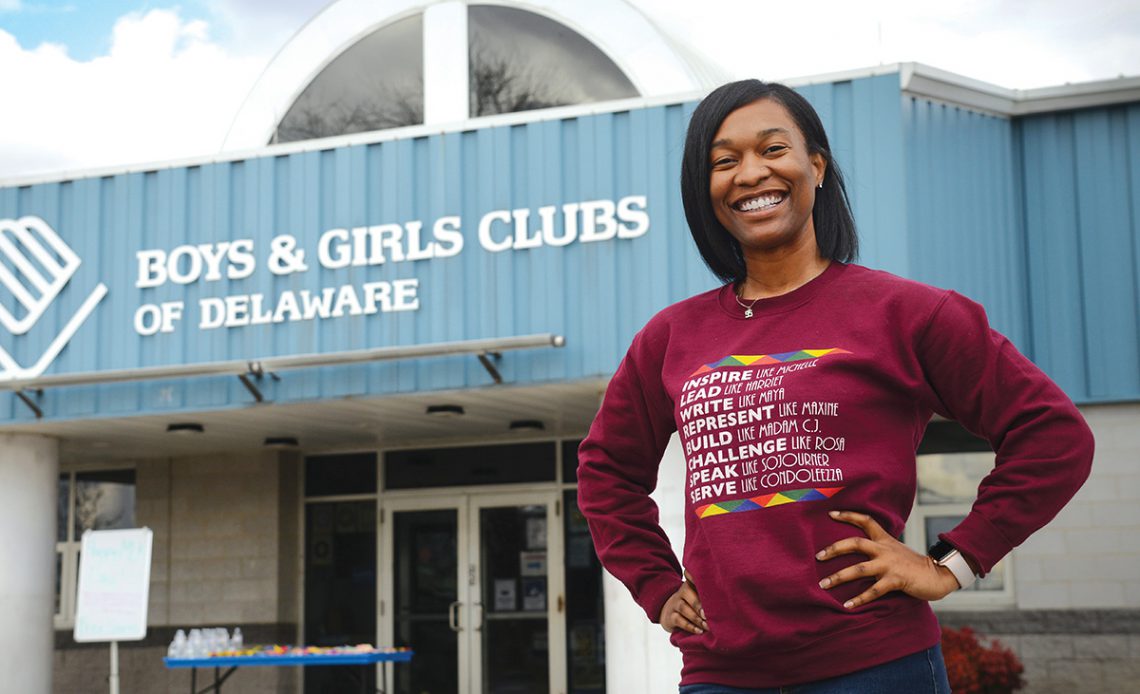 Amber Hickman-Taylor, director of the Greater Newark Boys & Girls Club, calls it “my top Club moment of all time.”

That moment occurred in a room at the club that was filled with kids, staff, board members and volunteers, as well as representatives from Wilmington University. They were there to join in the celebration as a surprised Charnaè Lusby, a long-time club “kid” and now an employee, received a full academic scholarship to Wilmington University.

Lusby had grown up around the club. She developed her skill at basketball there as a member of the Lady Sharks, and she went on to become a standout at Christiana High School. A 5-6 point guard, she made All-Conference and played in the annual Blue-Gold All-Star Game in 2013.

At that point, basketball seemed to be her ticket to higher education, and she received a scholarship to Harcum College in Bryn Mawr, Pennsylvania. Things didn’t work out there due to a coaching change, and she transferred to Lincoln University near Oxford, Pennsylvania, as a redshirt freshman. After her first year there and another coaching change, her scholarship was not renewed, and she dropped out due to lack of funds. She returned to her parents’ home in Newark and went to work for the Boys & Girls Club. Her dream of a college degree at that point seemed to be deferred indefinitely.

Lusby started as a “gym assistant,” a title that covers myriad jobs, including cleaning up the gym, setting up for basketball and other games, keeping score, and more. From there she was promoted to Youth Development Professional, counseling teenagers and helping them to find jobs. She also works with younger children, from kindergartners to pre-teens. At a busy club like the Newark facility, she says, she may deal with 100-150 kids.

“There are so many teaching moments and the chance to teach critical thinking all day long, helping children make better decisions” she says. “I love seeing the smiles on their faces, giving back to the community. I love the kids and the kids love me… the joy they bring to me is what gets me up every morning. This is where my heart is happy.”

Lusby is an unabashed cheerleader for Boys & Girls Club programs, calling them “phenomenal” and adding that the public is largely unaware of the potential they offer. “What a lot of people don’t know is the club opens the door to creativity,” she says. “We have writing programs, and reading, and arts and crafts, computer rooms, besides a basketball court. We have it all.”

Hickman-Taylor, who has worked at the Newark club for 16 years, says Lusby has been a welcome addition to her staff. “Charnaè is my right and sometimes my left hand,” she says. “She is there whenever any of us need her, she takes initiative to implement and run programs, and goes above and beyond her job description. We love her!”

As if she’s not busy enough at the club, in her spare time Lusby does some catering. She learned cooking from her maternal grandmother, whom she lived with while attending Lincoln, and has catered a lot of weddings, which, she says, usually order chicken or salmon. Her specialty, however, is tacos.

She calls receiving the WilmU scholarship “a life-changing moment.”

“I’m so thankful for this opportunity,” she says, “and I want to thank everyone who’s played a part in helping me achieve this goal.”

Says Dr. Dana Chapman, senior director of Institutional Research and Data Governance: “WilmU is known for giving students a second chance. We are thrilled that Charnaè  is still committed to furthering her education and we are looking forward to the day when she can cross the stage to graduate. We are inspired by her work at the Boys & Girls Clubs and hope to continue this partnership in supporting higher education for deserving staff members.”

Lusby is majoring in Organizational Management while continuing to work at the Newark club. After graduating, she hopes to open a restaurant while working at a Boys & Girls Club or another nonprofit, perhaps as an owner.

Lusby is the second Boys & Girls Club employee to win a full scholarship to WilmU. Jermane Duncan received the first one in June of 2016, earning a degree in Organizational Dynamics. Now the program director at the Greater Dover (Delaware) Boys & Girls Club, Duncan has continued his studies at the University, in the Administration of Human Services master’s program.

Meanwhile, Lusby has begun working toward her WilmU bachelor’s degree. She’s balancing a full-time job, her catering side hustle, and studies, so graduation may be a few years in the future, but whenever it happens, the entire Newark Boys & Girls Club is looking forward to the party.