The four scholarship winners are:

The four service members were selected to receive scholarship awards created in memory of General Timmons to specifically benefit members of the Delaware National Guard. The scholarships cover all remaining tuition after DNG annual tuition assistance funds have been depleted. 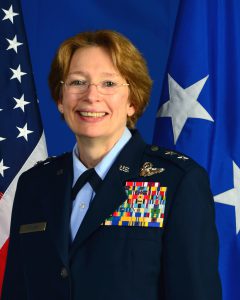 “Carol would have been ecstatic, humbled and truly honored for the opportunity to provide the means to four DNG service members to fulfill their educational dreams,” wrote Lynn Wass, General Timmons’ wife, in a letter thanking the University for the creation of the scholarships. “That would have meant the world to her, as education was an important factor in her life.”

General Timmons was a double alumna of Wilmington University, having earned a Bachelor of Science degree in Business Administration in 1984, and a Master of Science degree in Management, Public Administration, in 2013. “I know that General Timmons would have been very pleased to have these memorial scholarships created by her own alma mater,” said James Webb, director of Military Affairs for WilmU. “She loved the University and understood that education is key to career advancement and realizing personal goals. These DNG members will benefit from these scholarships in the years ahead, and I believe her memory will live on through their accomplishments.”

For more information about the scholarships, contact Jim Webb via email at james.s.webb@wilmu.edu.