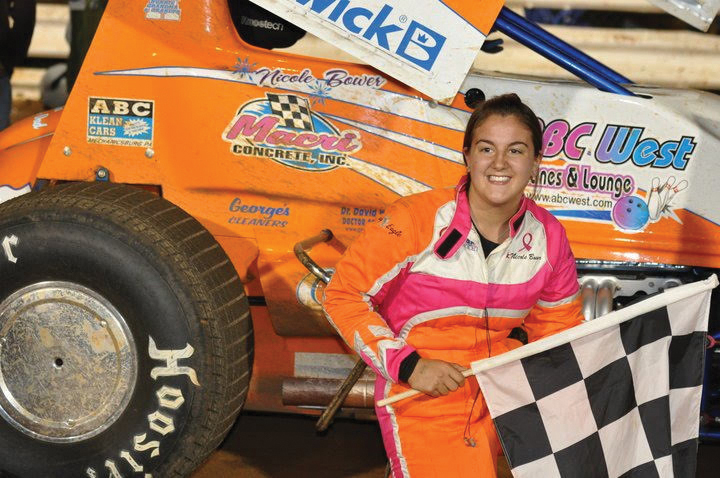 WilmU’s assistant bowling coach Nicole Bower is pumped to succeed in the two sports she loves.

Ask experts to rattle off the names of successful two-sport professional athletes and they will no doubt mention Bo Jackson and Deion Sanders (football and baseball), Danny Ainge (basketball and baseball), or, if they really know their history, the legendary Jim Thorpe, who dominated on the gridiron and also patrolled Major League outfields in the early 20th century.

Now, Wilmington University can lay claim to its own member of that exclusive club: Nicole Bower, the school’s assistant bowling coach. Bower not only excels in that sport, she’s also a professional sprint car driver.

The native of Camp Hill, Pennsylvania, comes by her bowling skills naturally: Her family has owned three alleys in Central Pennsylvania for 50-plus years; her father, Gary, is a United States Bowling Congress Hall of Famer; her uncle, Darryl Bower, is in the Pennsylvania State Bowling Association Hall of Fame; her younger sister, Brooke, won the Diamond Singles title at the 2015 USBC Women’s Championships and is a regular on the professional circuit.

Says Nicole: “I’ve been bowling since I could walk.”

Even her sprint car passion is related to the 10-pin sport, as she explains: “ABC West lanes, my family’s center in Mechanicsburg, was located beside a dirt track and my father and the owner of the track used to work together for kids’ nights and other events. We would attend the races frequently and
I got the itch to start racing. My dad got me a 1/4 midget when I was 12 and I worked my way up from there.”

Move up she did, from the quarter midget, with a Honda lawn mower engine, to 358- and 410-cubic-inch aluminum block engines, which can approach 900 horsepower. She’s been driving those for the past 13 years with notable success, including being the first female to win a sprint car race at Williams Grove Speedway in Mechanicsburg.

Using her favorite adjective, she says, “I’m super passionate about racing,” but adds that “it’s not a cheap sport.”

Fortunately, she says, her parents have been “super supportive” by sponsoring her. She admits, however, that her mother “loves the sport but doesn’t love that I do it.”

No wonder. Bower has slammed into a few walls on the track, suffering a couple of concussions. Seven years ago, she hit the wall going 130 mph. “After the car and I stopped flipping, I got out, took four steps and fell down,” she says. “Afterward, things hurt that had never hurt before.”

She’s become a bit more cautious since then. “When you’re 18, you think you’re invincible, but I’m not that young and dumb anymore.”

That same appellation might be applied to Bower the bowler. A standout kegler at Cedar Cliff High School in Camp Hill, where she also swam and played softball and basketball, she had no intention of going to college until she was contacted by Kim Kearney, then head coach at Delaware State University.

Bower knew Kearney from the women’s professional tour. “When my sister and I were young and my dad hosted women’s professional events, Kim took us under her wing,” says Bower. “She told me, ‘if I ever coach in college, you’re going to bowl for me.’ So when she called, I went.”

Bower says she loved Delaware State, making “many friends and getting a great education.” She stayed on as an assistant coach for one year after getting a degree in Business Management in 2013. Two years later, she got an email from John York, who had just been hired to coach women’s bowling, a new sport at WilmU.

York had coached at Cheyney University and the New Jersey Institute of Technology, and had been a personal coach for many high schoolers in New Jersey, so he had seen Bower in action and was impressed.

“He said he remembered me and asked if I would be interested in being his assistant,” says Bower.

She immediately accepted, partially because WilmU is much closer to her Camp Hill home than Delaware State’s Dover campus, but also because she was excited about being part of the inaugural season.

Bower says she and York faced quite a challenge in putting together that first team. “We had one bowler, one cheerleader, two softball players and a basketball player,” she says.

Despite the cobbled-together lineup, the team had credibility, she says, thanks to York.

“John is so knowledgeable, and he got uniforms and made sure everyone had drilled balls. That first year we may not have hit the head pin every time, but we looked like we belonged.” 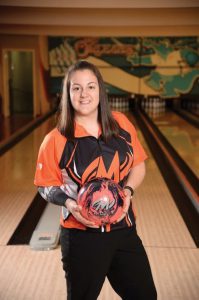 It’s been a steady upward trajectory since then. During the past season (college bowling runs from October to March), the Wildcats for the first time were ranked in the top 25 (No. 24) among all D1, D2 and D3 schools. They also won their first tournament — the Virginia Union Invitational — defeating 10 other schools. At this writing, they had an outstanding 31-13 record, although they had not yet started play in the East Coast Conference. (The Central Atlantic Collegiate Conference, in which all other WilmU sports compete, does not have bowling.)

York gives his assistant much of the credit for the program’s growing success. “I was looking for someone who could bridge the generational and gender gap between myself and the players,” says the 60-year-old coach, “and also someone who could inspire them to expand their horizons far beyond what they initially thought they were capable of. Nicole sets the ideal example of this for the players, with her ability to compete, excel and win in two male-dominated sports. Just incredible.”

York says Bower goes about her business “with a quiet, understated, yet firm approach, befitting her character. Her competitive nature fits perfectly in our program, and she is always there to reinforce that winning attitude to the team whenever it may start to waver. She has the absolute respect of all the players, coaches and opponents.”

Right now, Bower has no aspirations to become a head coach. For one thing, the time commitment is daunting. “John puts in so much time with recruiting, meetings and practices,” she says.

And Bower has precious little free time. “Travel for bowling, between college and personal, probably fills about half of if not more of the year,” she estimates, “and racing I do locally, but I race about 40–50 shows a year on the weekends, March through October.” Oh, and she also manages the bar at one of her family’s centers.

She is not officially on the professional women’s tour, but she’s been bowling in professional events for the past four years and has eight 300-games to her credit. “I’m super fortunate to have Motiv Bowling sponsor me,” she says.

“I’d like to go full pro,” she says, although she realizes that may mean walking away from racing — while she still can.

It would be a difficult decision. “I love (both sports) the same,” she says, “but in bowling, I can pretty much support myself.”

Her mother no doubt would endorse that decision.