WilmU: A Sound Choice For The Hearing Impaired

Aided by the University’s Disability Services, these students are achieving success in the classroom.

The human ear is a fragile, complex organ, made up of tiny bones and membranes and hair cells. When something goes awry in that complicated mechanism and a human being loses the sense of hearing, it alters that person’s world dramatically. Of the five senses, only sight is more critical to the quality of life.

Communication is the biggest challenge for the deaf. Estimates of the number of Americans who know American Sign Language (ASL) range from 500,000 to two million — less than one percent of the population. And lip-reading is minimally effective; it catches less than 30 percent of what a speaker says. So loss of hearing can be devastating.

Or, it can be just another of life’s challenges to be met and overcome. That’s the case with Wilmington University students Dawn Peer, Brittainy Payne and William “Billy” Malaspino, who, with an attitude that mixes determination with a bit of stubbornness, have refused to let their handicap define them. And in the classroom, they have received invaluable help from the University’s Disability Services. 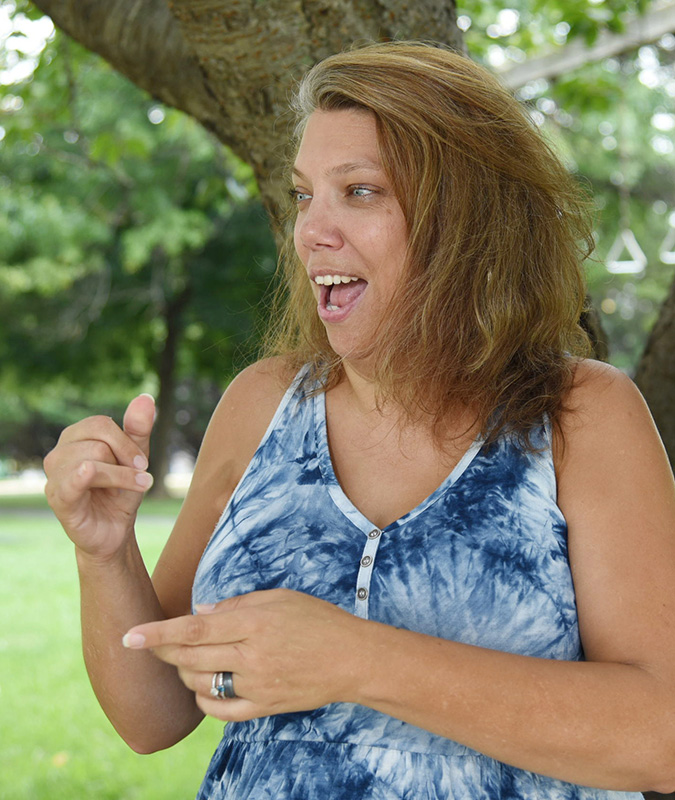 Dawn Peer lost her hearing when she was a few months old due to an unknown cause, although it was suspected that her cochlear hair cells had disintegrated. She is the only member of her family who is deaf.

Her family moved from Long Island to Delaware in 1983 when she was 8 years old, and she was placed in the Margaret S. Sterck School for the Hearing Impaired in Newark (now the Delaware School for the Deaf).

“I was an angry child and difficult child to my mother and step-father for a very long time,” Peer admits. “I didn’t know how to deal with my emotions.”

At 14, she was mainstreamed to a vocational high school. Inspired by the television show “China Beach” and Dana Delaney, the actress who played nurse Colleen McMurphy, she became interested in nursing. That is, she says, until a teacher pulled her aside one day and, after complimenting her on her ambition, told her she couldn’t be a nurse because she was deaf. “It was one of the most malevolent comments, and something I’ll never forget,” says Peer.

Depression set in, and the following year she was ready to drop out of school. But her mother, who had always been supportive, worked with her school advisor to have her daughter transferred to Christiana High School. Peer’s grades jumped. English class proved especially challenging, but with the help of a tutor she met the school’s standards and received her diploma.

Now 43, Peer has experienced some low points, but she has met each setback with resilience and determination, although she sometimes has paid the price for her pride. “I don’t ask for help,” she says, “and [when I was younger] I was very stubborn and did things on my own and I learned a lot from my mistakes along the way.”

Today, she has her first apartment and her first car, and she holds down two jobs. She is in her third year at Connections Community Support Programs, Inc., which provides an array of health care, housing, and employment opportunities. There she aids individuals in group and independent homes. At Jicha Communication, which offers client services that connect employers with prospective employees, she assists clients at their job sites.

Happily married for five years, Peer has three daughters from a previous relationship — 12-year-old twins and a 9-year-old. She ended that 20-year relationship in 2012, but she has an amicable arrangement with the girls’ father. “My girls are very fortunate to have three parents who are on same side and support them. We all are on same team,” says Peer.

One of her proudest achieve-ments was enrolling in Wilmington University in 2015. Encouraged by her husband “to go out and get my degree,” she was steered to WilmU by Christy Hennessey, program coordinator for the Deaf and Hard of Hearing Services at Independent Resources Inc., a nonprofit that serves people with disabilities. “Christy told me that Wilmington has a wonderful system for disabled students,” Peer says.

She wasn’t sure what major to choose but eventually, she says, “I chose Psychology because of the field I work in. Once I attended the classes, I learned things about myself and my job aspirations.

“I want to work with disabled children who grew up in broken homes being told they can’t do something because they can’t hear. I want to encourage them to be successful in life regardless of their handicap.”
—Dawn Peer 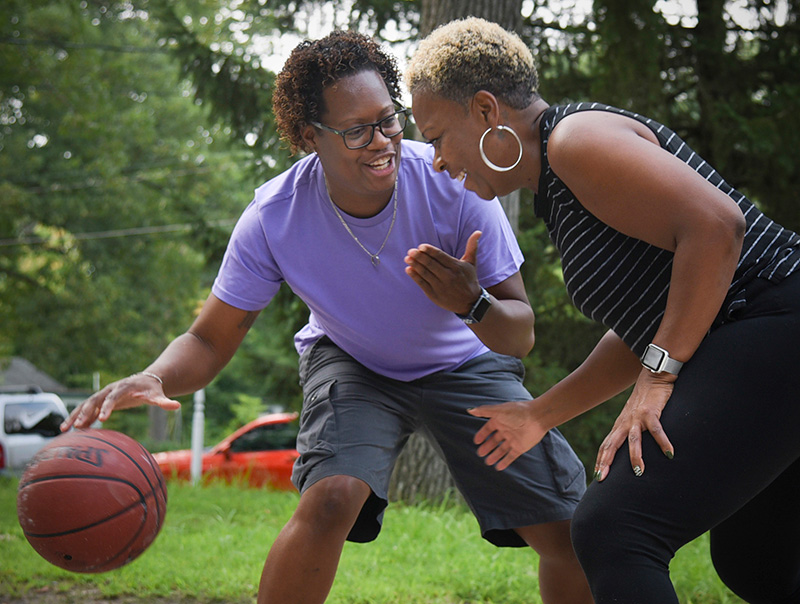 Unlike Dawn Peer, Brittainy Payne has trod a relatively smooth path through life, thanks in large part to her athletic ability, which has led to her calling — coaching. But above and beyond that is her positive attitude. “I’m proud to be deaf,” she says. “That’s who I am.”

Now 31 years old, she was born without hearing, but was supported by her parents and two sisters, all of whom can hear. While her parents didn’t learn ASL, they used “home signing” — personalized gestures to communicate with her.

She was mainstreamed in her New Jersey district high school, where she had deaf friends, but she eventually enrolled at the New Jersey School for the Deaf in Trenton. There she played volleyball, soccer, softball and basketball, setting some records in the latter sport.

She moved on to Gallaudet University, the only higher education institution for deaf and hard of hearing students in the world. She played two years of softball and four years of basketball at the Washington, D.C., school and graduated in 2011 with a degree in Physical Education.

Following a two-year stint as a dormitory supervisor and substitute teacher at the New Jersey School for the Deaf, Payne went to work for the Pennsylvania School for the Deaf in Philadelphia, where she teaches gym and coaches the girls basketball team. “Basketball is my jam,” she says with a smile. She takes great pride in her team’s success. Last season, they lost in the finals of the league championship. “We’ll be back this year,” she says confidently.

She enrolled in WilmU in 2016, and expects to receive her master’s in Special Needs Education in December.

“I’ve been very happy here,” Payne says. “I find the University is incredibly accepting of me, the teachers, counselors. I fit right in. I feel the University really understands the Americans With Disabilities Act [a civil rights law that prohibits discrimination based on disability].”

In praising the University’s services for the deaf, she singles out the interpreters. “They have been the best,” she says.

Deaf students are required to notify Christyn Rudolf, manager of Disability Services, about their need for interpreters at least two weeks before the start of each semester. Students are assigned two interpreters per class. Each interpreter signs for 15–20 minutes, then the other takes over, which minimizes fatigue. For tutoring sessions, a single interpreter is assigned. The student is not charged for any of these services. 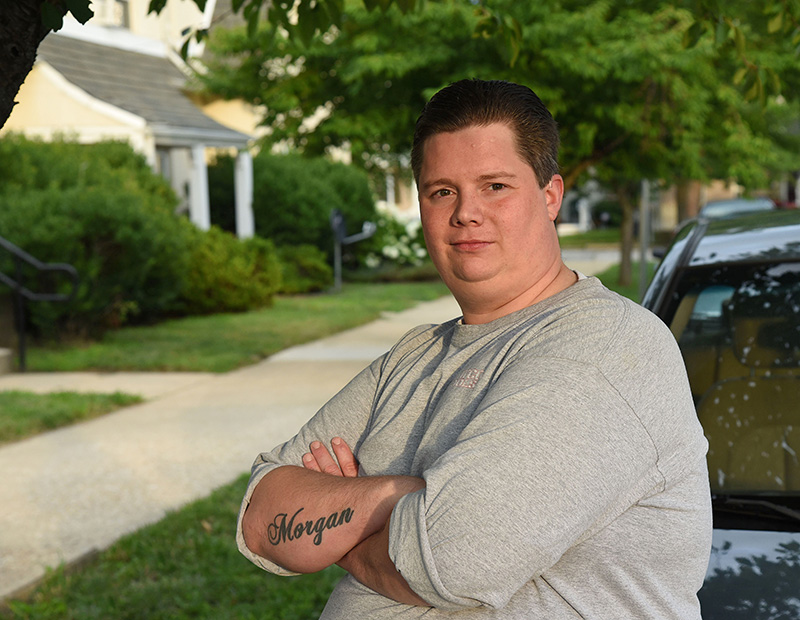 Malaspino chose WilmU because of the convenient, flexible scheduling that has allowed him to take nighttime classes at both the Brandywine and New Castle campuses following his shifts at Pep Boys in Prices Corner, just outside Wilmington.

Billy Malaspino also grew up in a supportive household with a brother, two sisters and a mother who knew sign language. But he’s not as dependent on interpreters as Peer and Payne. Although born deaf, he received a cochlear implant 13 years ago when he was 26. The electronic implant provides a sense of sound to those with severe hearing loss. He can also read lips. As a result, he can carry on a spoken conversation, but he needs an interpreter in the classroom.

Malaspino, who lives in Claymont, Delaware, with his 16-year-old daughter, enrolled in Wilmington University in 2014 with an eye toward changing occupations. He’s been an automobile technician for 20 years, and the job has taken a toll on his body. So he’s looking forward to getting his degree in Computer Network Security at fall commencement. Cyber security is a growing field and, as he explains, much less physically demanding than repairing cars.

He chose WilmU because of the convenient, flexible scheduling that has allowed him to take nighttime classes at both the Brandywine and New Castle campuses following his shifts at Pep Boys in Prices Corner, just outside Wilmington. He says he’s done well at WilmU, carrying a 3.5 GPA.

Like others in the deaf community — even those with college degrees — Malaspino faces some challenges. He’s had a few job interviews, and he finds some potential employers hesitant to hire someone who’s hearing-impaired.

But, he adds, “I’m fortunate to have supportive parents.”

As are Peer and Payne. And all three appreciate and value the positive response they’ve received from the WilmU community. As Peer says, “I feel fully accepted by other students and my professors. I’m just like any other student to them.”