The Making of a Leader: Chuck Baldwin

This alumnus learned the value of education in the Navy, then co-founded the Delaware Military Academy. 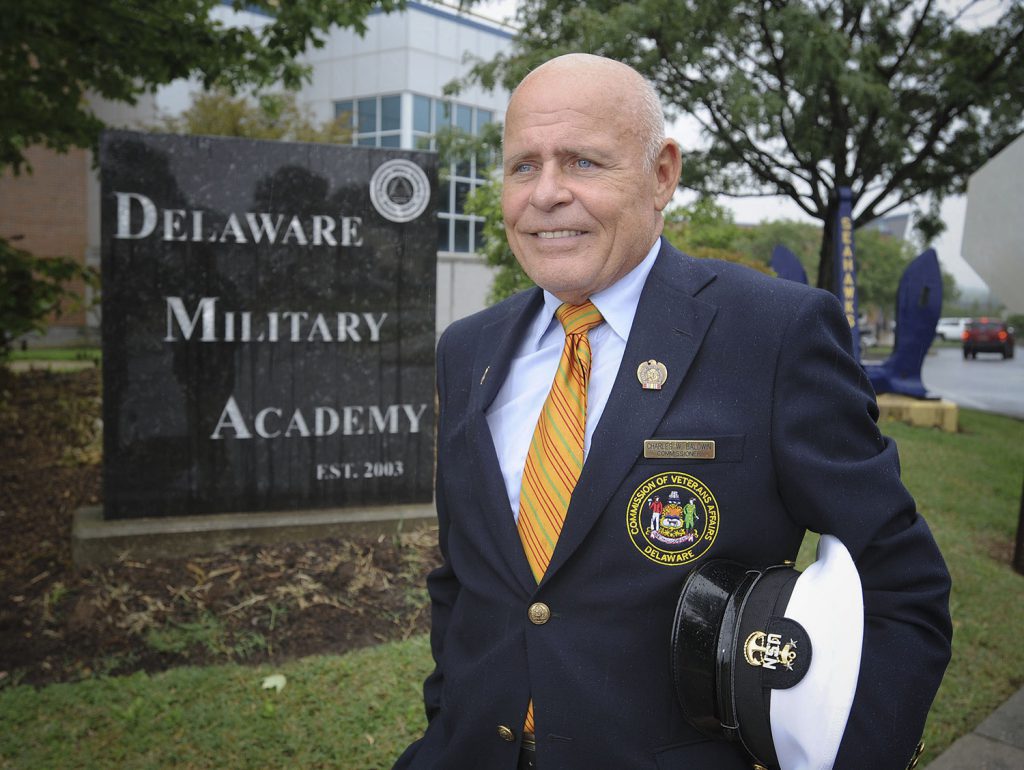 Charles Baldwin is the founder of the Delaware Military Academy high school. He recently published a book, Carrier to Classroom, Transferring military skills into a career in education. Photographed in front of the DMA, Wilmington, Delaware.

There’s nothing like love to make you understand the value of education. That’s the lesson Chuck Baldwin took away from courting his wife — one of many lessons gleaned from a life that brought him success in the Navy, followed by a second and equally successful career as a school teacher, founder and administrator.

Baldwin was in the early stages of the quarter-century he spent in the Navy when his duties took him to the island of Sardinia, Italy, to run recreational services at the base. There he met a young girl, Savatarica “Rica” Nieddu, who worked in the hotel where he was living.

Says Baldwin: “It was love at first sight.”

“We would watch TV in the lobby, and I would try to learn Italian,” he says. “Within six months, I was fluent.”

He proposed — in Italian — and a traditional two-day wedding followed. Soon after, the newlyweds left for Baldwin’s next assignment, at Great Lakes Naval Training Base in North Chicago, and embarked on 43 years (and counting) of marriage.

Looking back, Baldwin says, “That’s when I learned the importance of education.” He explains that he had taken Latin in high school, but didn’t think he “had learned anything.”

“But for some reason,” he says, “when I heard an Italian word, to me it sounded right.” He’s suspects that his grounding in Latin helped him learn his new bride’s language, which is descended from Latin.

It was this new-found appreciation for learning that would eventually lead Baldwin to become an educator — a career he calls even more satisfying than his very successful 25 years in the Navy. What’s more, he has captured the knowledge he gained from both those careers in his new book, “Carrier to Classroom,” which is aimed at military veterans, encouraging them to go into education.

Achieving success in two major endeavors is not something the young Charles W. Baldwin would have predicted for himself. Growing up in Kankakee, Illinois, one of Cyril and Gertrude Baldwin’s three children, he was an admittedly average student.

“In school, I was an extremely good follower and a fair Number 2 guy, but never the leader,” he writes in his book. “My skill at plausible deniability was acquired very young. Just spelling leadership was a challenge, let alone understanding all it entailed.”

His father had served in the Navy before World War II and in the Merchant Marine during the war. Chuck chose a similar path, leaving for Navy basic training after graduating from Kankakee’s Eastridge High School in 1968. He quickly adapted to the life of a sailor, and became that which he had not been in high school — a leader.

After basic training, he did a 13-month tour in Vietnam, where he helped train Vietnamese sailors. Somewhat to his surprise, he found that he had an ability to communicate with and teach young people.

“Maybe it’s because I never grew up,” says Baldwin, “but I developed a rapport with them and became excited each day to work as well as learn in their company.”

Other postings followed, including his fateful service in Italy, and another in 1988 to the Philadelphia Navy Yard, which led to his family (which, by then, included daughter Antonella and son William) moving to Delaware. He steadily climbed the ranks until he became a command master chief, the highest rank among Navy enlisted personnel.

He truly came into his own in 1990 when he was assigned to the nuclear-powered aircraft carrier USS Dwight D. Eisenhower — “The Ike” to the sailors who manned her.

As command master chief, Baldwin says, “I was the commanding officer’s senior enlisted advisor and represented the crew in all matters related to discipline, morale and training. All 3,200 enlisted troops were my direct responsibility.”

His three years aboard The Ike were perhaps the most enjoyable, meaningful and educational of all his Navy assignments. The ship, home base to 82 aircraft, went on several maneuvers, including six months in the Persian Gulf as part of Operation Desert Storm during the Iraq war. As a result of that duty, Baldwin received the Meritorious Service Medal in 1992, and he was honored as one of four finalists for the Navy’s top enlisted post of Master Chief of the Navy.

During his Ike years, he also developed many of the theories of leadership outlined in his book. The second chapter, for instance, is titled “Good Shoes,” which are necessary for “management by walking around.”

“MBWA is a tool that has been discussed and used in the corporate world for years,” writes Baldwin. “It means you must get up from your desk and be seen in order to gain knowledge of your business.”

He also developed MAP, an acronym for Moral, Academic and Physical — a program of personal development. It asks participants — whether sailors or students — to complete a daily task in each of those three areas. “Morally,” Baldwin writes in his book, “the task could be something as simple as taking out the trash, or as involved as a community service project. Academically, you may read a book or an article, view a documentary, attend a lecture. And physically, you can play catch, go for a run. Or, when a commercial comes on, instead of eating a Twinkie, do 10 pushups.” He calls it “mapping your day.”

Baldwin retired from the Navy in 1993 and almost immediately launched his second career — in education. “I loved it right away,” he says.

He became associate Naval Science instructor with the Seaford School District in southern Delaware, where he established the first Navy Junior Reserve Officers Training Corps in the state. He followed that by creating a second unit, at the request of the Navy, at Christiana High School in New Castle County. His work there earned him the district’s Citizenship Award in 1997 and Teacher of the Year in 1998.

His Navy experience and rank allowed him to teach NJROTC without a college degree, but over the years he had taken courses from the Navy, at the University of Maryland and the University of Delaware, and in 1995 he received his bachelor’s degree in Sociology.

While he loved teaching, he had his own ideas about how to run a school, so with the thought of moving into administration, immediately after receiving his bachelor’s he enrolled in the master’s in Education program at what was then Wilmington College.

He got the degree in less than two years, thanks in part to an intense summer program in which he took four courses over a four-week period, attending classes for eight hours a day and doing eight hours of homework at night. “That was hell on earth,” he says.

But well worth it. “I got a quality education at Wilmington from outstanding instructors. And I know good instructors,” he adds. “I took courses at the Navy Senior Enlisted Academy (in Newport, Rhode Island) and the Navy has some of the best instructors around.”

Baldwin singles out the leadership class of Dr. James Nardozzi, an adjunct at WilmU for 35 years who retired in 2011. “I still quote some of the things he told us,” says Baldwin.

Dr. Nardozzi returns the compliment. Although it’s been nearly 20 years since he taught Baldwin, he remembers him well. “He was a great guy, interacting with everyone, and he just exuded leadership. I’m not surprised at the success he’s had. I’ve talked to several of his students, and they all speak highly of him.”

Dr. Robert Rescigno, dean of the College of Business, has worked on several charter school initiatives with Baldwin. “Chuck works hard, and he’s very committed to public education and to students,” says Dr. Rescigno. “He’s always done the right thing for them.”

The charter school phase of Baldwin’s career began with the Delaware Military Academy, an idea hatched at a 2001 Fourth of July cookout at the home of Lt. Col. Jack Wintermantel, an Army friend of many years and close associate during Baldwin’s tenure as a JROTC instructor. Baldwin had recently become principal of Kirk Middle School in Newark, Delaware, and he began talking to Wintermantel about his work.

“We were both lamenting the state of education and the need for more JROTCs and military schools in general,” Baldwin writes. “My concern with military schools was that they were so expensive to attend and most of the students were not military. A tuition-free charter military school open to young women and men who desire to attend based upon military interest would be a great idea.”

Wintermantel agreed, and the two men began planning the school. Baldwin, who in addition to his duties at Kirk, was director of Logistics for the Delaware National Guard, resigned from both positions and devoted full-time to finding the land, the funding, faculty and students for the new school. The colonel joined him a few months later, and in the fall of 2003 they opened DMA as a public charter school with 300 cadets in grades 9 and 10, with plans to increase enrollment and add 11th and 12th grades in subsequent years.

Today, DMA is the largest NJROTC full-time program in the U.S. Navy, with an enrollment of 584 cadets in grades 9-12. There are more than 200 on the waiting list each year. Academically, it’s in the top tier of Delaware public high schools.

As commandant of the school, Baldwin blossomed. He and the cadets shared a mutual respect and affection that’s rare for administrators and student bodies. With his ability to relate to young people, he was able to convey to the cadets the Navy values of honor, courage and commitment, which he adhered to in both his professional and personal life.

Parents were fans of the school too. In “Carrier to Classroom,” Baldwin tells the story of the time a student tripped and put his elbow through the drywall. “Having no money to repair the hole,” Baldwin writes, “I sent out a plea to my parents, asking if they knew anyone who could fix the wall for no cost. Within an hour, four contractors arrived to repair the damage. Gosh, I loved that school!”

Baldwin helped establish other JROTC units in Delaware, and today there are more than 750 young men and women in those units. For his efforts, he was awarded the Delaware Distinguished Service Medal.

He stayed at DMA until 2011, when he became principal of the Charter School of Wilmington. He retired from there two years later, and today he serves on several youth leadership programs and on the Delaware Commission of Veteran Affairs, representing Vietnam veterans.

He and Rica spend most of the year in their long-time home in the Wilmington suburbs and travel back to their second home in her native Sardinia during the summer. His ties to the Navy remain strong. Son-in-law Anthony Pullella is now commandant of DMA, and son William is a division commander at the Naval Recruit Training Center in Great Lakes.

Meanwhile, Baldwin has helped send 25 midshipmen to the Naval Academy, and he continues to mentor others who have expressed interest in the academy.

But sometimes he reminisces about his days as a teacher and administrator. “I miss the interaction with the students and faculty,” he says, “and working in an environment where ‘aha moments’ are the order of the day.” WU

To get a glimpse of some of those aha moments, get your copy of “Carrier to Classroom,” available on Amazon.