It took six years to get the train out of the station, but now that Head Golf Coach Harry Jennings has it rolling, it seems unstoppable. 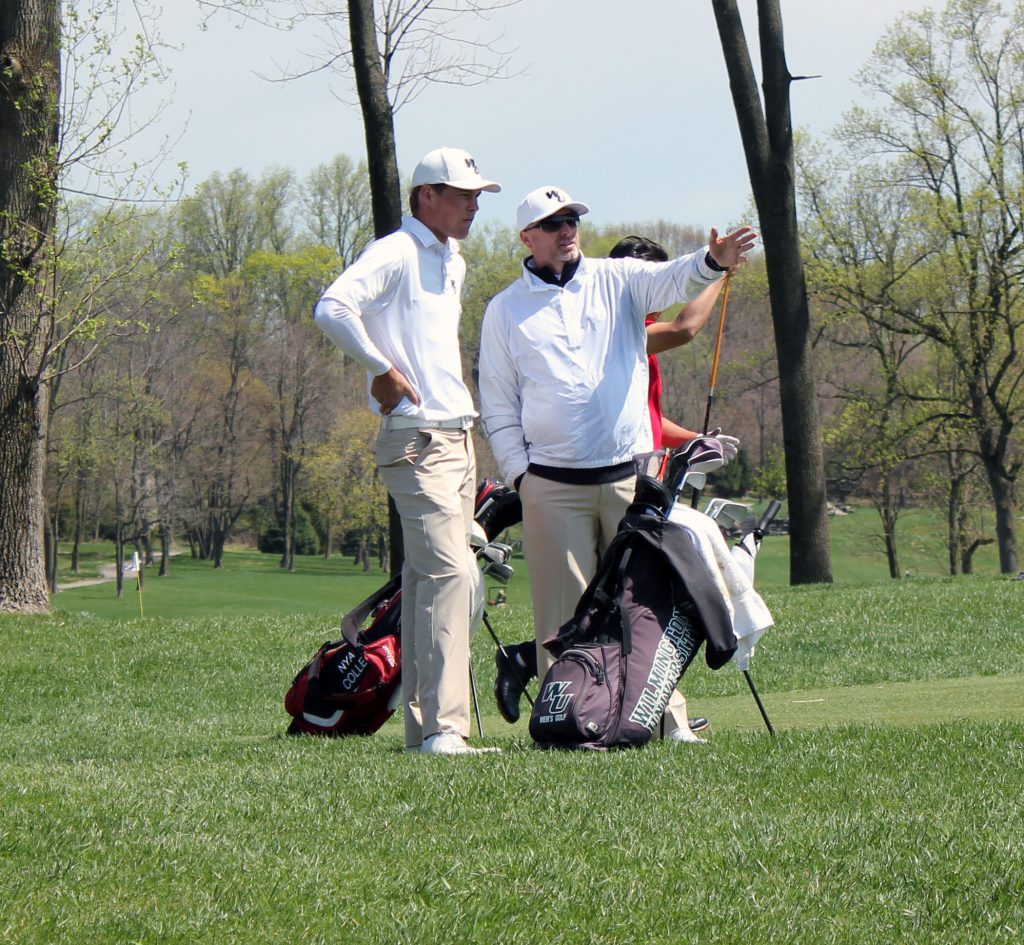 Coach Harry Jennings and Andreas Lunding during the 2015 CACC Championship.

Now in his 14th season at the helm of the Wildcats, Jennings has led his team to seven consecutive Central Atlantic Collegiate Conference Tournament Championships, and they were vying for their eighth as this issue went to press.

The Wildcats began their run after placing second in 2008 and again in 2010 before finally breaking through with their first Tournament Championship in 2011, ending Post University’s string of five straight titles, which was then a conference record.

“We were so close in years prior,” Jennings says. “There are only so many golfers in the tri-state area that we could go after. I knew I couldn’t get the best golfers in this area because they wanted to go Division I (NCAA) or play in in the South, so I had to change my scouting and look overseas.”

The culmination of the international success shined through during the 2016 spring season. Playing in their fifth NCAA Division II National Tournament in the previous six seasons, Wilmington advanced farther in the National Championship than any team from the East Region in the history of the tournament.

The 2016 squad finished eighth in the country, falling to eventual NCAA Division II National Champions Saint Leo in the quarterfinals. That year’s roster was an international mix, with student-athletes from Delaware, Maryland, New Jersey, Massachusetts, Germany, Scotland and Denmark. The top two Wildcat finishers at the National Championships were Andreas Lunding (Denmark) and Freddy Braun (Germany).

“No one has been as far as we have [in the national tournament],” Jennings says, “but we are definitely not satisfied with just reaching the Top 8 in one season. The next step is to be consistent in reaching the Top 8 and moving on to play for a National Championship.”

The only coach in the history of Wilmington’s golf program, Jennings has won 41 tournaments. He has achieved that through outstanding recruiting and setting up regular season schedules that prepare his team for the postseason.

The Wildcats routinely boast one of the toughest regular season schedules, competing against many of the top teams in the country. This fall, they traveled to Florida for three tournaments, to California and to Hawaii. Five of the final eight teams at the 2017 National Championship were from Florida.

“Playing at these tournaments helps us two-fold,” says Jennings. “First, we’re playing head-to-head against some of the best players in the country, and even the world. Once the playoffs come around we can just focus on the course and our game, not who we’re playing against. Second, it helps me recruit. The schedule allows me to bring in players that I normally wouldn’t be able to because we’re a northern team. Being able to play across the country helps bring in recruits I wouldn’t otherwise be able to reach.”

The 2017–2018 squad will look to maintain the momentum from the previous eight seasons. Meanwhile, Jennings has continued his international reach, extending his recruiting search into Canada.