This alumna is Head of School at Las Américas ASPIRA Academy. 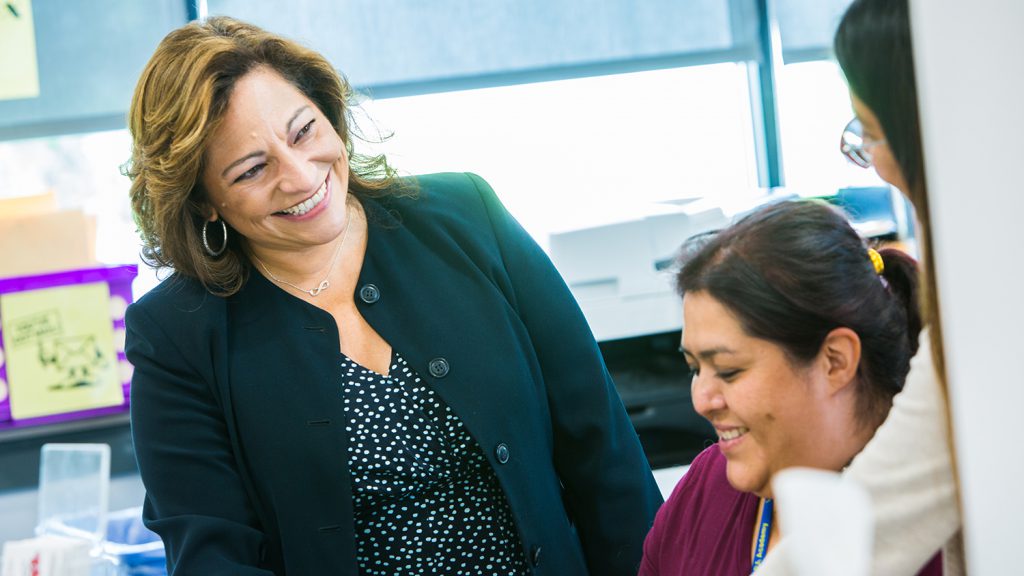 “As long as I’m head of this school, there will be a dress code.”

Margie Lopez-Waite’s naturally cheerful mien hardens a touch when she speaks those words. Her stance on uniforms evolved from painful childhood experiences that she shares with new students at Las Américas ASPIRA Academy (LAAA) in Newark. On the first day of school, she explains the dress code this way:

“When I was your age, having enough clothes and enough nice clothes to wear to school was a challenge, and so some people teased me. That made me self-conscious and affected my self-esteem. So I wanted to take that distraction away for you. I want you to wake up in the morning and put on your uniform and not have to think about that. Everybody here walks into this school on the same level, no matter where you live, what kind of car your parents drive or where they work. That’s one less thing to distract you.”

She has found that the students at the six-year-old charter school quickly adapt to the rule. It’s softened by dress-down day each month, when students can pay $1 each to wear casual clothes. “Dress-down is very popular,” says Lopez-Waite, “and we use the money to pay for field trips, purchase different items, host different events. It all goes back to them.”

She became head of school shortly after the LAAA charter was approved in April 2009, and now nearly everything the Wilmington University alumna does — and not just during the school day — seems to be focused on those children. Which is only natural, to her way of thinking. “When someone is an educator, it’s not what you do, it’s what you are. You’re thinking about the school 24/7.”

Early in her own life, Lopez-Waite came to understand the value of education. She rose from a childhood of borderline poverty to earn the first college degree in her family, become a leader in Wilmington’s Latin community, and help hundreds of Latino, African-American, Caucasian and Asian-American youth embark on their own odysseys of achievement.

Her story began in Ellenville, New York, where she was the third of four children born to hard-working Puerto Rican immigrants who had moved there from the Spanish Harlem section of New York City. Her father worked in a factory in Ellenville until cutbacks cost him his job. Unable to pay rent, the family was forced to pack up and make the long journey to Dover, Delaware, where her mother’s sister and brother-in-law took them in.

“There were eight of them and six of us,” says Lopez-Waite. “Fourteen people in a three-bedroom ranch. And there was one bathroom.”

But it was a bonding experience. “We’re cousins, but we consider each other brothers and sisters,” she says.

She went to Caesar Rodney High School in nearby Camden and took college prep courses. “I always loved education,” she says.

She made the CR cheerleading squad, and during one basketball game against arch-rival Dover High, she noticed a member of the Dover team, Wally Waite. “I was cheering and he was playing. He was one of their star players, and he looked good in shorts.”

The attraction was mutual – and lasting. “We’ve been together 33 years and married for 27,” she says.

They both wanted a college degree. But while Waite went from high school directly to Dover’s Wesley College, where he continued his basketball career, Lopez-Waite, after graduating in 1984, went to work to save money for college.  “I had great parents,” she says, “but they couldn’t help financially. There was zero money available for my education.”

She worked in the now-defunct Leggett Department Store in the Dover Mall for two years before enrolling at Delaware State University, and continued to work throughout her college years.

Undeclared as a freshman, she became a marketing major in her sophomore year. Although her heart was in teaching, she learned that “marketing was where the money was, and I wanted to be able to pay back
my student loans.”

A top student, she was recruited in her senior year into the management training program at MBNA Corp., the banking giant headquartered in Wilmington that would be acquired by Bank of America in 2006.

She worked in the credit card area, concentrating on business development in the Hispanic market. That’s where she was when the Bank of America deal went down.

She took that occasion to reassess her career goals and decided she still had what she describes as “a passion for education,” so in March of 2006 she resigned, and one week later enrolled at Wilmington University to earn her master’s in Secondary Education and School Leadership.

She had a job lined up for the following fall as a Spanish teacher in the Appoquinimink School District. “So,” she says, “l wanted a program that would give me the flexibility to go to classes while working full-time. And what I loved about Wilmington was the way they have their seven-week block, so I estimated I could get my master’s in about 18 months. And that’s exactly how long it took.”

She took classes at night at the Wilson Graduate Center and in Dover. “I liked the flexibility that in any given semester, I could get the classes I needed. And living in a small state, I could drive from our home in Bear to Dover in 40 minutes.”

Among her instructors was Lisa Lombardozzi, an adjunct professor and representative in the Education Partnership Office in External Affairs. On several occasions since Lopez-Waite received her master’s in 2008, Lombardozzi has asked her former student to speak to her classes.

Describing Lopez-Waite as “remarkable” and “spectacular,” Lombardozzi says, “I asked her to speak because she is an educator who gets it, and because of her depth of knowledge of students with language barriers. I wanted my students to see the impact teachers have on students who are multilingual. It’s always good for students who aren’t multilingual to understand what it’s like to come to this country and not be well-versed in this language or this culture. My students always gained a lot from her insight. She’s a great storyteller and she uses stories to highlight what they will see in the classroom.”

Al DiEmedio, WilmU’s director of Teacher Preparation in the College of Education, was Lopez-Waite’s advisor during her time at the University. “Margie always impressed me as a very committed individual who was goal-oriented,” he says, “and she’s doing an excellent job at ASPIRA, where she is absolutely satisfying a tremendous need in the education community.”

Reflecting on her WilmU experience, Lopez-Waite says, “I chose not to take online courses because I thought I would learn more in the classroom, interacting with the other students, and that was really valuable. And I loved the instructors. They were experienced educators and practitioners who taught not just from a book but from their own experiences.”

While she worked toward her master’s, Lopez-Waite was becoming more involved in the Latin community, especially ASPIRA of Delaware, where she had been a volunteer and board member since 2004. ASPIRA (Spanish for “to aspire,” it’s not an acronym but is all caps in the organization’s official name) was founded in New York more than 50 years ago as a Puerto Rican association. It has associate offices in Connecticut, New York, New Jersey, Delaware, Florida, Illinois and Puerto Rico that serve a diverse population of youth, with the specific mission to empower the Latino community through advocacy and the education
and leadership development of its youth.

Lopez-Waite had planned to teach for five years, then move into administration, but her involvement with ASPIRA fast-forwarded her career. She was recruited to become one of the seven members of the founding board for LAAA, then she transitioned into the head of school role shortly after the charter was approved in April 2009. She was involved in all aspects of planning and preparation for the school, which is in a former warehouse in an industrial park.

The school opened in 2011, and she and her staff welcomed more than 300 students in grades K-5. Each year another grade has been added, and this year 45 eighth-graders graduated.

She is currently immersed in a bond-financed $11.5 million expansion that will add a second floor to the school and increase square footage by about 19,000, for a total of about 120,000 square feet.

“I’m learning about doorknobs, window treatments, floors, you name it, as well as bond financing,” she says of the 18-month project, most of which is scheduled to be completed by the start of the coming school year.

She has found that her MBNA experience, where long hours were the norm, helped prepare her for being head of an expanding charter school who must put in 70 or 80 hours some weeks. “But,” she says, “it doesn’t feel like work.”

“Although our roots are deep in the Hispanic community, what we’ve created here is a very diverse student population. It’s 60 percent Hispanic, with the remainder made up of African-American, Asian-American and Caucasian students.”

She is most proud of the school’s diverse enrollment. “Although our roots are deep in the Hispanic community, what we’ve created here is a very diverse student population. It’s 60 percent Hispanic, with the remainder made up of African-American, Asian-American and Caucasian students.”

LAAA is the first dual-language (English/Spanish) charter school in Delaware. Students become fully proficient in reading, writing and speaking both languages through immersion as they learn their core subjects.

Lopez-Waite is quick to credit her staff as well as the students’ parents for the school’s success. In fact, she says, “Parents would like us to expand to 12 grades, and we’ve done studies, but the high school would have to be located on a different campus, and right now that’s not an option. Taking on additional debt right now would be a problem.”

Aside from the school, her other priority is her family. She and her husband, an assistant principal at Mount Pleasant High School who also earned an M.Ed. at WilmU, are parents of two adult sons, Quincy and Isaiah.

Margie Lopez-Waite has come a long way from a childhood of living with relatives and wearing clothes that were mocked by classmates, but she expresses no bitterness or regret. In fact, she’s able to find the upside of sharing a bathroom with 13 other people: “You learn some real life lessons.”

Then, with that hearty laugh, she adds, “and you have some great stories to tell at family reunions.” WU