Dr. LaVerne Harmon became the fourth President of Wilmington University on July 1, 2017. With more than two decades of experience at WilmU, she has hit the ground running. 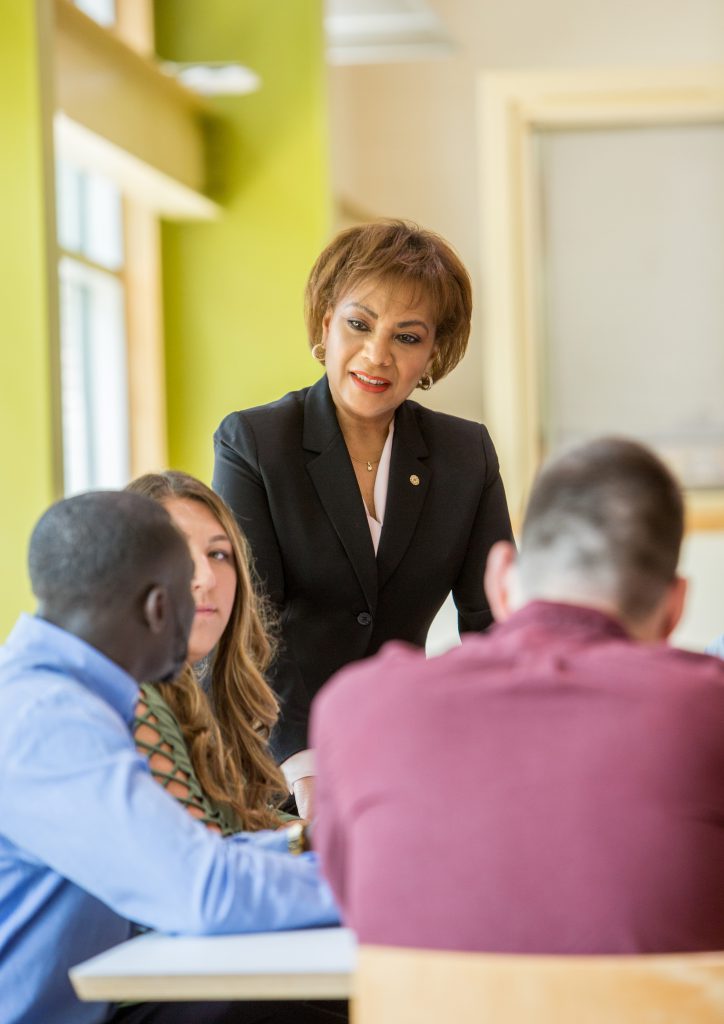 Dr. LaVerne Harmon could not have known the path that lay before her when she began her career at then Wilmington College in 1989. Nor could she have predicted the journey that would take her from assisting a president to becoming one.

Shortly after joining the staff, Dr. Harmon was awarded scholarships to earn her bachelor’s and master’s degrees from Wilmington College, which, like many of its students, she accomplished while working full-time. She attended classes for 10 consecutive years, which included her coursework at the University of Pennsylvania, where she earned an Ed.D. in Higher Education Administration.

“I was excited to complete my degrees at Wilmington and the coursework at Penn,” she says. “But what mattered more to me was that my research at both Wilmington and Penn served Wilmington College.”

More specifically, that it served its students. Many of the findings in her doctoral dissertation proved integral, and, in partnership with co-workers, suggestions for improvement were implemented.

Most are quick to praise Dr. Harmon for her compassionate nature, but it was hard work, discipline and ingenuity that propelled her upward trajectory. For much of her two-decade career, she remained behind-the-scenes — contentedly, quietly and purposefully focused on student success.

The only African-American woman ever to become a college or university president in the state of Delaware, she leads in an age when the percentage of women holding the top job at colleges and universities stands at about 30 percent nationally. She acknowledges humbly the responsibilities aligned with being a role model, not to mention the fourth President of one of the nation’s fastest-growing universities. But Dr. Harmon is far more driven to secure Wilmington University’s place in the educational landscape than her own.

If a process involved strategic planning, internal University operations or conceptualizing plans for future growth, Dr. Harmon was involved in it. As Executive Vice President, the role she held before becoming President, she worked closely with former University President Dr. Jack Varsalona.

“Dr. Harmon is an exceptional leader,” says Dr. Varsalona. “She has the respect of students, faculty, staff and the board, and she earned that respect after 28 years of dedicated service to this University. She has the ability to understand the needs of everyone she comes in contact with and the desire and compassion to help them.”

She plans to maintain WilmU’s collegial atmosphere, which she believes encourages employees to share ideas, feel valued and thrive in an authentic learning environment.

“Both Dr. Varsalona and I are student-centered, which means students always come first,” she says. “They were Dr. Varsalona’s top priority, and they will continue to be mine.”

While her career has been focused principally on student success, Dr. Harmon has worked in several capacities. Via roles as assistant to the President, then in leadership positions in human resources, marketing, recruiting, admissions, student affairs and alumni relations, she managed multiple functions and led the implementation of critical changes that positively affected students as well as operations.

“I have been fortunate to work in several areas,” says Dr. Harmon. “But I’ve always had the advantage of working with dedicated people who are just as passionate about serving students and the University as I am. Success, to me, is always the product of teamwork and mutual respect.”

Dr. Harmon’s doctoral dissertation formed the genesis of demographic analysis of the student population at Wilmington College that would eventually become customary in future years, exploring student satisfaction and whether their needs were met. Her research identified and validated the college’s many strengths, as well as offerings that could be added or enhanced.

Working alongside colleagues — for whom Dr. Harmon gives much of the credit — she led numerous programs and initiatives and was a key player in developing WilmU’s strategic initiatives and institutional priorities. She led the implementation of the University’s Leadership Institute, a program that develops leadership skills, and established the offices of Student Affairs and Disabilities. (The Office of Disability Services was recognized as its own entity in 2012 but is still a component of the Student Affairs department). She additionally guided complex negotiations that advanced WilmU’s athletics from NAIA to NCAA Division II.

Her accolades are many, including the American Council on Education Leadership Award, the National Association of University Women Educator of the Year Award, the Community Service Award, the Markevic A. Johnson Scholarship Foundation Woman of Distinction Award, and the Phi Delta Kappa Educator of the Year Award. She serves on the boards of United Way of Delaware, The Grand Opera House, Boys & Girls Clubs of Delaware, and Wilmington Leaders Alliance.

In addition, Dr. Harmon was instrumental in establishing the Delaware American Council on Education (ACE) Women’s Network and was a member and Paul Harris Fellow of Rotary International. She has mentored for several groups and was an adjunct instructor for WilmU’s College of Social and Behavioral Sciences. 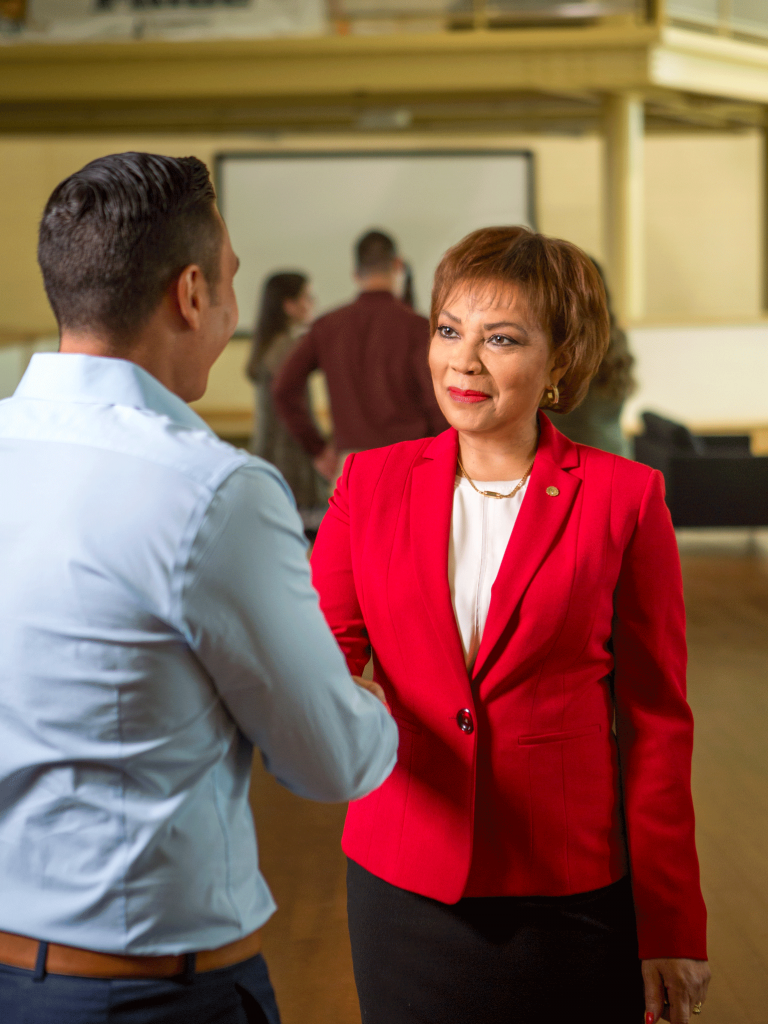 According to TIAA Institute’s 2017 American College President Study, the percentage of female presidents at colleges and universities was 30 percent in 2016, up only four percentage points from 2011. The percentage of college presidents who were minorities also increased by four percentage points, from 13 percent in 2011 to 17 percent in 2016. WilmU currently serves more than 20,000 students: 63 percent female and 37 percent male — not unusual, given national statistics. According to the Digest of Education Statistics, female college students outnumber their male counterparts nationwide — and have for decades.

Dr. Harmon believes that all employees and students, regardless of ethnicity, age, gender or economic status, can discover their potential. She has been immersed in professional development herself and overcame formidable obstacles.

“She was an adult learner with a full-time job — just like the majority of our students,” says Dr. Jack Varsalona. “She is now a brilliant administrator who leads with both knowledge and passion for the University’s mission.”

As Dr. Varsalona was nearing retirement, he instituted a mentoring and evaluation program for senior administrators to aid the Board of Trustees in evaluating potential candidates to succeed him as President, says Board Chair Joseph J. Farnan Jr. “The board followed the process very closely, and it soon became apparent to us and the entire University community that Dr. Harmon’s experience, demonstrated executive abilities and personal attributes made her the perfect choice to succeed Jack.”

Those attributes included her ability to inspire employees and students to work to the best of their abilities, and her belief in placing significant value on positive interactions and communicative relationships.

“I want people to love their jobs,” says Dr. Harmon. “We’re all here to serve students, but we have to believe in what we do. Our employees have always been dedicated to providing the best possible experience for our students, and we have alumni all over the world who speak highly of their time with us.”

Her goal is to honor Wilmington University’s mission of offering quality education to all who seek it. She also plans to keep student debt low (WilmU students have 60 percent less student loan debt than the U.S. average) and support scholarship opportunities. Ultimately, Dr. Harmon wants WilmU’s scholars to be open to all possibilities.

“I also plan to support our staff in their efforts to build corporate and academic partnerships, as well as ensure sustainable enrollment growth,” she says. “Everyone deserves an excellent education, and we will continue to provide convenient, affordable and relevant career-oriented programs.”

From her time as vice president of Student Affairs through her current position, says Dr. Varsalona, “Dr. Harmon has shown that she understands what is going on throughout the University. She is a futurist and a born leader, and that will come in handy in the University’s future.”

She also understands that her education at WilmU gave her a chance for a new beginning and a new life. “I want that for every student,” she says.

“Dr. Harmon will be successful as President of Wilmington University because she is an extraordinarily talented executive who truly cares about the well-being of all the constituencies of the University community: the students, faculty, staff and administrators,” says Mr. Farnan. “On a personal note, she defines what a good person and a good friend are in every respect.”

The feeling is mutual for Dr. Harmon, who calls Mr. Farnan “a man of integrity and fairness.” Among her other role models are Mr. Irénée du Pont Jr., the board’s former chair and longtime board member, as well as Dr. Varsalona and former WilmU President Dr. Audrey Doberstein. Her first and most important mentor was her mother, Mrs. Laura Thomas. “She taught me to respect myself and others,” says Dr. Harmon. “She also taught me empathy and generosity, particularly for those less fortunate, and she always believed in the value of education.”

Dr. Harmon is humbled by the opportunity to serve as Wilmington University’s fourth President, yet she embraces her role with confidence. Success, to her, is achieved through shared values and shared vision. To paraphrase leadership theorist Peter Senge, a learning organization encourages learning throughout all levels of an organization so it can adapt and transform itself to function effectively in a complex world. One person does not impose a shared vision. It’s derived from people with common interests and a sense of shared purpose.

Dr. Harmon hopes to inspire such a vision, because, as she says, “every student will benefit from it.”