(This article originally appeared in a recent issue of eLearn Magazine, which is sponsored by Blackboard. It appears as written, and was not edited for WilmU Magazine style. Used with permission.) 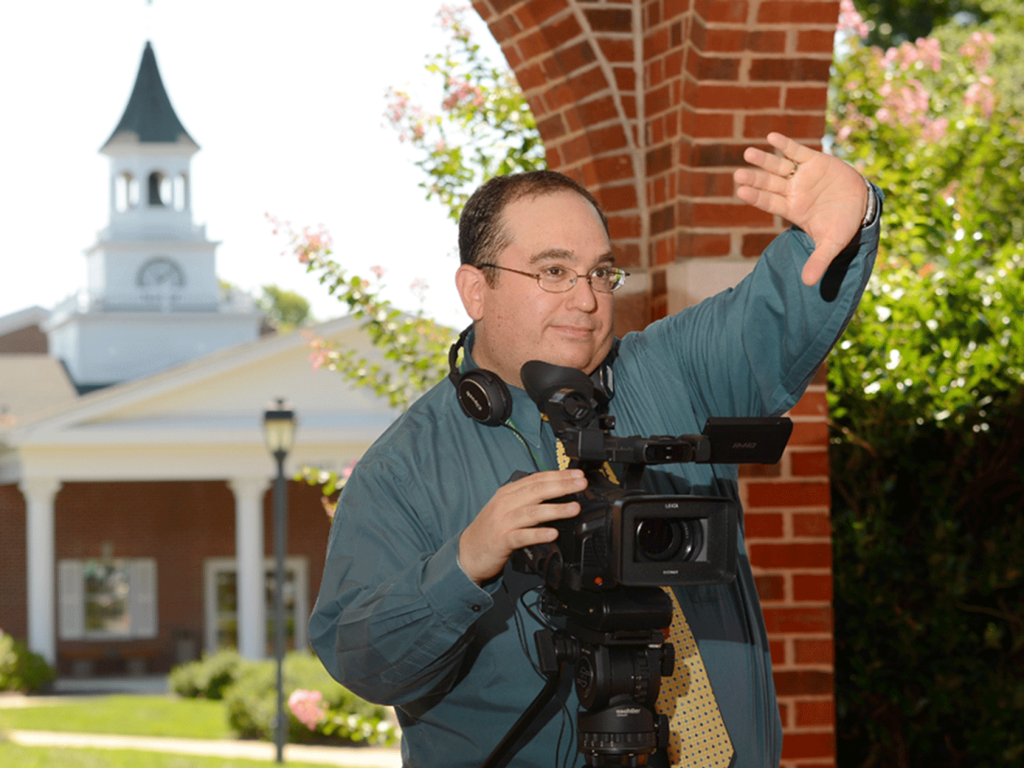 Most people in industries around the world will tell you that video is the present and the future.

Industries like advertising, journalism, entertainment, and even education are embracing the video format to completely transform their industries. Video has become so important because it stimulates all parts of the brain and allows for the person to feel like they were there to feel the experience as a whole. Video in learning is especially important because most people will need to learn by seeing and by listening.

Russ Lichterman is a former television production professional who never thought he would end up working in education when he first started his career. While working in broadcast TV production, he started teaching a course in film history as an adjunct at Wilmington University. He loved it so much that he got a master’s degree in education while still working in television. In that master’s program, he met an instructor who would later become the dean of the College of Online and Experiential Learning.

They eventually realized there was a need for someone to be dedicated to the multimedia and video aspect of online learning that was growing exponentially. After nearly 15 years in broadcast television he came to the university full time to help grow video and multimedia in e-learning. Today, he realizes the importance of his job since there is increasing demand for video recorded classes, e-Learning support, and even requests to transmit live classes for students to attend remotely.

In January of 2017, there were two students who reached out to the university for help. They needed two more courses each in order to graduate. The problem was that they were in another city and could not attend the class. The University had to come out with a solution to offer synchronous learning via a digital option. They decided to build two video-enabled classrooms. Russ explains that there are low cost options to turn a classroom into a video-enabled environment that allows instructors to transmit the class to the students in real-time. Russ Lichterman suggests a few things to keep in mind when building a video-enabled classroom on a budget.

You have to choose what conferencing platform the institutions want to use and what will be the form of delivery to the students who are connected remotely. Wilmington University decided it would be best to use Blackboard Collaborate, something that they already had implemented.

The classroom needs to have interactive projectors or smart boards. The reason for this is that, realistically, the students who are away will be able to see the teacher and their gestures, but probably won’t be able to read what is written on the board. Since Blackboard Collaborate has a whiteboard option, students who are far away will have the text on their screens and the students in the class will see it like it was a normal whiteboard.

For video recording, Wilmington University has a 1080p camera, which generally is used for security purposes, because it does not record anything. It just transmits the signal to an IT computer via USB, that way it can be rerouted to the Blackboard Collaborate platform. The microphones are USB tracking microphones that work really well in a medium sized classroom because it tracks where the teacher is moving and turns on as the teacher moves around the classroom to always get the best sound. It is also important to implement speakers in the classroom. This way, the students who are far away can turn on their microphones via Blackboard Collaborate and participate if they have a question. Russ is clear about having enough knowledge about the technology, the resources, and the streaming for it to be able to work. There are options of having an integration company install the software and the hardware, but those options are very expensive. The camera and microphone here come out to around $1,000, including the means to get the video converted to a USB signal. It’s much more cost effective for most schools that are looking to build a video-enabled classroom for the first time.

Since the implementation of these two classrooms has been going on for less than a whole semester and it was something that had to be done quickly, it was good for them to be able to do it in an inexpensive way that was also agile. But now they are seeing the interest of project leaders and deans of other faculties about using these classrooms, and the classrooms are already booked for classes during the summer and fall terms.

He knows that this accidental opportunity of having video-enabled classrooms that can transmit classes in real-time is a possibility to create a whole new learning environment. Of the approximately 20,000 students that are currently studying at Wilmington University, there are about 8,000 that take at least one online course within the university. There are many students that may also be interested in either going to the class on campus or attending remotely.

Though this is currently a small-scale pilot project, the live streaming classes added to the thousands of asynchronous e-learning classes offered by the university creates the potential for there to be a huge market. They do, however, want to keep several things in mind: not all classes are fit for a digitally transmitted synchronous learning environment. This can be a burden for the teacher because they have to cater to two types of students (in person and virtual). Russ says that classes that are more black and white, such as calculus, work very well with the classroom studio method. In contrast, classes like sculpture or even a humanities lesson that might stir up a debate can be much harder; it all depends on how the teacher is willing to handle it. The second thing to keep in mind is that even asynchronous learning needs lots of video material, and he encourages teachers to make video announcements, stream videos, video discussion groups, and also teach students to make videos as well.

The educational technology and multimedia teams have also put a lot of effort into the asynchronous part of the e-learning using lots of tools that integrate really well with Blackboard Learn, such as Kaltura. They use Kaltura for live video streaming, but that is only for one-way interaction they also use Kaltura for asynchronous participation and video discussion groups. Right now, Wilmington University has over 42,000 videos in their Kaltura library; faculty members and students create nearly all of the videos.

As Russ says, it’s all about finding the tool that works. And for that reason, Wilmington University has started offering a certificate in E-Learning Design and Technology. Students learn how to handle the e-learning in various situations and environments and are prepared to utilize and assess what technology is best used and when. This shows that the students believe in the future of e-learning.

Russ says that as of right now, e-learning is still structured around traditional four year learning institutions, but we will start seeing a drastic change in the near future.

A change where degrees are not what is most important (like today), but that with a mixture of certain certificates, a person can make their degree unique and have the same equivalent of a master’s degree. It no longer makes sense that a university tells different students that they all have to take the same classes. One size does not fit all, so why should education be the same if the students are so different?

It is clear that video is the future of e-learning because there are so many ways to do it and engage learners in a different and better way. Wilmington University, through a series of unexpected events, has found the future of their university through synchronous and asynchronous digital video options. WU