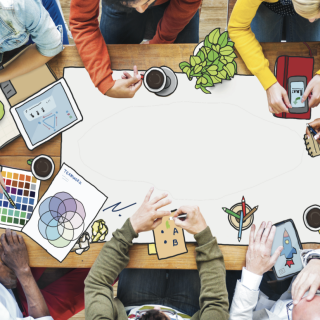 Wilmington University is rapidly growing as a destination for international students who gain the education they need to thrive in a global economy — and a support system to help them navigate the complexities of studying abroad. In a single year, WilmU has more than doubled its international enrollment — without a formal marketing campaign to promote the school outside the region.

“We give students individual attention, that one-on-one that they need,” says Angelina Burns, WilmU’s international admissions coordinator. “They are happy to be here because they know we care.”

WilmU is far outpacing the national growth rate, according to the latest Open Doors report from the Institute of International Education, an annual survey of study abroad trends. In 2013-14, colleges in the United States enrolled a record 886,052 international students, an increase of 70,000 students or 8 percent over the previous academic year.

Nationally, college students from China account for about one-third of all international enrollment, the report says. Chinese students are evenly divided between graduate students and undergrads. 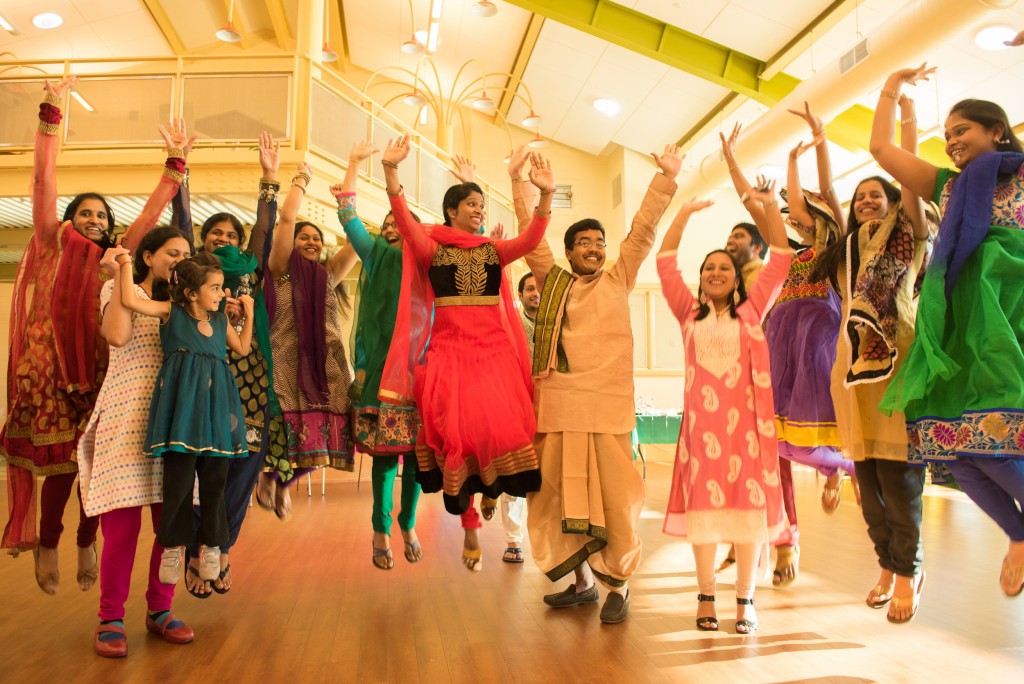 Locally, the largest group of students comes from India, the homeland of 732 students (as of this writing), according to Dana Eggleston, director of institutional research. Many attend classes at the McGuire-Fort Dix-Lakehurst campus in central New Jersey, where there is a large Indian population. And international students aren’t limited to the school’s 14 campuses in Delaware, New Jersey and Maryland. In addition to F-1 visa holders, a number of overseas students are studying online.

“Sometimes life gets in the way,” Burns says. “Students go home to get married, to take care of relatives, and they can complete their degrees online.”

Nepal, in southern Asia, is a distant second to India in enrollment, with 64 students, followed by the West Africa nation of Mali, with 41 students, and Turkey, in western Asia, with 31 students; 24 students from China are enrolled.

WilmU’s graduate programs are the biggest draw, accounting for more than 75 percent of international enrollment. That reflects the national trend, in which U.S. grad schools outpaced undergrad programs, achieving a 9 percent increase in international students, according to a survey by the Council of Graduate Schools.

Of WilmU’s 938 international graduate students, 610 are enrolled in the information assurance M.S. program in the College of Technology. The majority is from India.

Because many students are referred to the school by friends and relatives from their homelands, students tend to pursue the same areas of study, Burns notes. In Nepal, that’s accounting and finance. Turkish students also are interested in business.

“Often these students stay in touch through social media,” Burns says. “They maintain that connection and share information, including where they are getting an education.”

The university’s reputation for strong academics and student support also drew international students looking for a safe haven when other schools they were attending lost their accreditation in 2013, putting students’ visas in jeopardy.

“They were in a bad situation and we were happy to help them,” Burns says.

Students come from more than 80 countries, says Jacqueline Varsalona, assistant vice president of institutional advancement. In addition to helping with admissions and registration, students can expect guidance in finding housing, connecting with health insurance, plus navigating banks, the Department of Motor Vehicles and government offices, including Social Security.

“The international admissions offices, as well as all of the student service groups work hard to ensure incoming international students’ needs are tended to,” says Varsalona. “Many are arriving directly from the airport with their suitcases and need our assistance at this time.”

WilmU’s international office recently expanded to a staff of five to accommodate the burgeoning ranks of international students. An important part of the job is staying on top of regulations, ensuring students get accurate answers to questions that range from replacing lost paperwork to obtaining drivers’ licenses.

“We don’t leave the office until every student is taken care of,” Burns says.

Three times a year, the university offers seminars on Optional Practical Training or OPT, a program that allows international students to remain in the country while they are gaining experience through jobs or internships.  Every semester, a lawyer comes in and talks about filing for work visas and addresses other visa regulations and concerns. There are workshops on such topics as immigration and filing alien taxes.

“It can be very confusing for students because the rules vary by the country,” Burns says. “We help them to sort things out.”

WilmU also provides testing and placement in English as a Second Language (ESL) courses in varying levels for both graduate students and undergrad.

“We know that this is a growing area and we want to be responsive in developing programming and socialization for these students,” Varsalona says.

Burns serves as adviser to the Multicultural Student Association, whose mission is to foster and enrich students’ awareness of 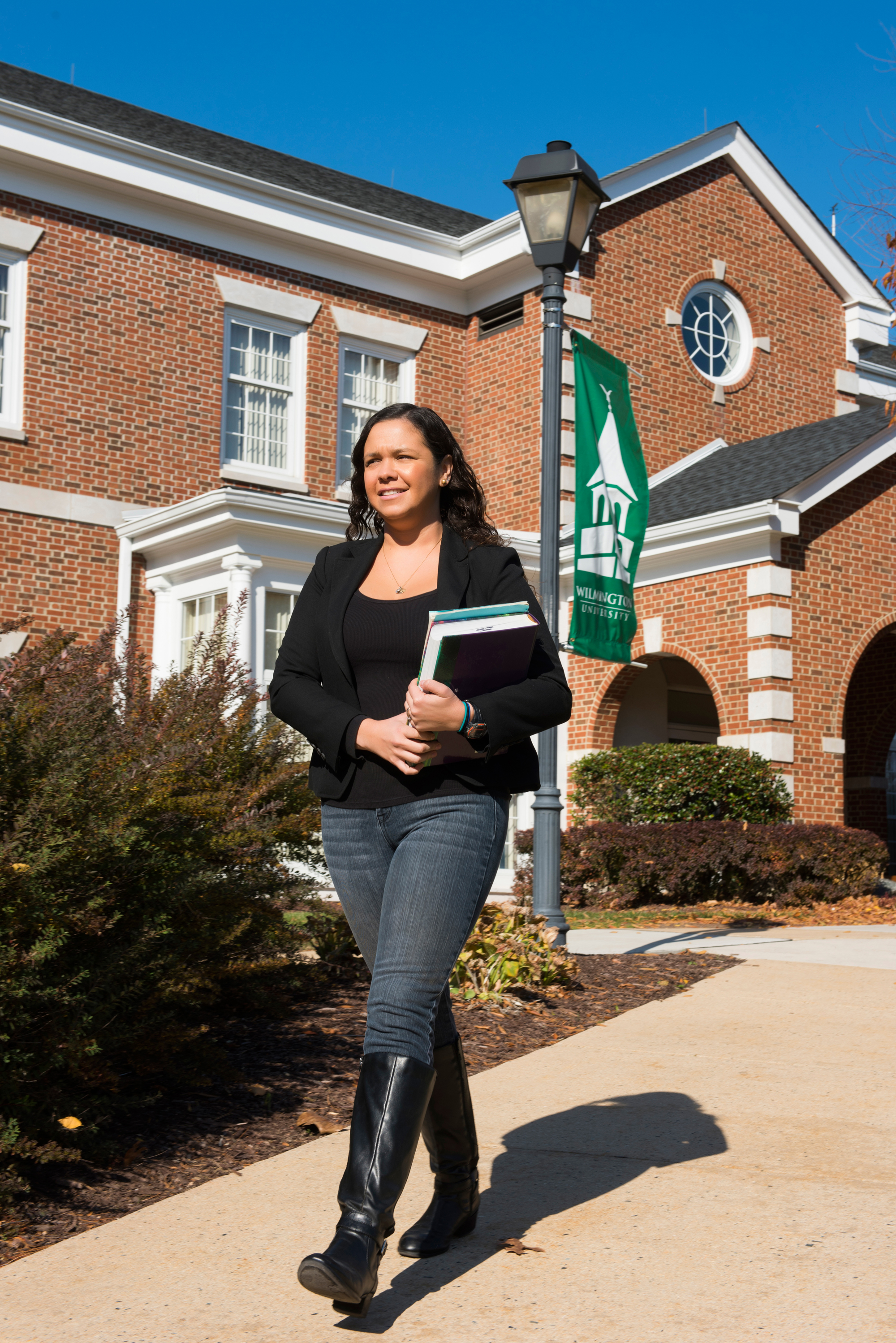 Martins on the New Castle campus.

diverse cultures. The club meets regularly and also offers networking opportunities through its Facebook page. Membership has grown from 50 students to more than 200.

In November, the club sponsored a fashion show celebrating International Month, a festival that featured foods from around the world, dancers from India and henna hand painting.

Juliana Martins, 31, of Avondale, Pa., hails from Sao Paolo, Brazil. She chose WilmU on the recommendation of friends and soon made new friends from her native country — soccer players on the Wildcats men’s team.

“I felt really welcome,” she says. “Whenever I had a question I got a quick answer from the international student office.”

The staff helped Martins obtain transfer papers that allowed her to travel to Brazil once a year. She also benefited from programs available to students throughout WilmU. When she was pursuing her degree in business management, the school arranged for internships at Brandywine Country Club and the Internal Revenue Service.

As graduation approached, Martins began looking for a full-time job in her field, but didn’t get any nibbles in response to her résumé. So she turned to Richard Fischer, an adjunct faculty member in the College of Business, who worked with Martins to refine her résumé to make it more engaging to prospective employers.

“He was a great help,” she says. “After he fixed my résumé, I got a lot of interviews.”

Martins completed her degree in May. She has a good job, working in logistics at UPS.

“I think we are going to see a lot more students from Brazil enrolling at Wilmington University,” she says. “I personally have recommended the school to more than 10 people.”

Francoise Conde, another recent grad, was born in Guinea in Africa. When young Fran was 7, her family moved to France. “The political situation was very bad in Guinea,” she says,“and my father had to leave.”

Decades later, she decided to make another major move. Conde had been downsized from her well-paying job as a sales representative for a European pharmaceutical company. Her severance package included reimbursement for college expenses, providing her with an opportunity to learn new skills. So, she says, she decided to come to the United States to study, “so that I could restructure my life.”

First, she enrolled in an English language program in Philadelphia. She also was accepted to a university there, where she planned to pursue a degree in marketing. “But the school was too expensive,” she says.

A fellow student in her English class suggested Conde look into Wilmington University. She came to Delaware to visit and liked what she saw.

“Classes are small and I needed a place where people can help me to take care of my concerns,” she says. “Wilmington University has a human side. You can say ‘hello’ to your teachers. That is very powerful for me.”

Because French is her native language, Conde struggled to write in English. When she learned she had access to no-cost tutoring through the student center, she quickly embraced the opportunity.

“There were wonderful teachers who were willing to read my papers before I submitted them, someone who would say, ‘this sentence is unclear to me. What do you mean to say?’” she says. “It was very impressive that there was all this great stuff available to me, for free.”

She also attended workshops on international students’ visa rules and regulations. (The international center also arranges for lawyers to speak on such topics as maintaining a visa.) Conde met twice with a lawyer, who explained changes in the law and how to maintain her status.

Conde, who is 53, appreciates that WilmU is a popular choice with older students as well as their younger classmates.

“It was a good exchange to be with young students who would help me with the computer when I was lost — and I would help them with their homework,” she says. “We shared various experiences of life and many of us are now connected through LinkedIn.”

Her hard work paid off. She completed her degree in 2.5 years with a GPA of 3.69. (International students must maintain full-time status and make normal academic progress.)

“I like that the school is strict, but fair,” she says. “Being held to a high standard makes students work harder.”

After graduation, she took a part-time job at the Brandywine Country Club, where she coordinated advertising and answered the phone. Today, she works at Burlington Coat Factory, where she continues to hone her skills.

“I needed to be in the workplace so I could interact with people and see how things work, and to improve my English,” she says.

Based on the successes of international students like Conde and many others who have earned their degrees at WilmU, Varsalona expects enrollment to continue growing.

“We see the result of word of mouth, of students getting recommendations from other students who have actually experienced our school,” she says. “Further, international students contribute to a rich and diverse experience at Wilmington University. Being part of an international community benefits everyone.” WU